EU leaders want any deal Britain reaches with the EU after Brexit not to be better than the deal it currently has within the Union. Exploring this idea will uncover much nonsense. Here are some “thought experiments” which, by their nature, ignore most practical issues concerning Brexit.

We’ll take two broad approaches, one technical, the other emotional.

Technical first. Imagine we fully understand the terms and conditions of Britain’s current commercial arrangement within the EU. Next imagine Britain agrees a package identical in every detail with its present arrangement but outside the EU (we did say we would ignore practical issues). This we can call the ‘neutral outcome’; neither better nor worse. This should satisfy those who do not want Britain to be better off out than in, however, it won’t satisfy those, such as the Maltese PM, who argue that any deal should be “inferior”.

Now imagine (we’re asking a lot of your imagination) that a single term in the package, just one, differs from its equivalent in the present package. If the new term is better than the one it replaces then Britain is better off, which outcome is not acceptable to EU hardliners. (Unless the EU decides to apply the new term to all members, which moves us back to the neutral outcome.)

So, the new term should be worse. The condition that Britain should not be better off out than in is logically satisfied.

This can easily be extended to multiple terms being different. Either more terms will be better, which fails to meet the condition so will not be accepted, or an equal number are better and worse, which takes us to a neutral outcome, or more are worse, which satisfies the condition.

Who would decide whether Britain is, in fact, ‘not better off’? That decision will not be left to anyone in Britain, since no one in Britain agreed to the condition. Possibilities include: the Commission, the Council, the Parliament, the five (or some subset of) presidents, the heads of the remaining 27 member states. But would all these groups agree to one of them having the right to decide? Or would each group have to agree? What if the result was also worse for some individuals, groups or companies remaining in the EU? And how would the EU set about making the decision? Can we believe they could make and agree the decision, that Britain was not better off?

All this assumes the implausible starting point, that we fully understand the terms and conditions of Britain’s current commercial arrangement within the EU and so can measure the changes, term-by-term, against the criterion of not better, or worse.

If no one fully understands the intricate arrangements, built up over more than 40 years, then it will not be possible to compare the packages, just each individual term or condition. And it is more likely that EU negotiators in each corner are briefed to make sure that their part of any deal is not better than its current value. And then the EU and Britain will have to decide whether the whole agreement is better or worse.

However, if the condition is intended to be emotional rather than technical, it perhaps should have been phrased, ‘Britain should not feel better off out of the EU than as a member’. (And, at least as importantly, it should seem worse off to others to discourage them from leaving.) Now we are in slippery emotional territory.

British voters decided that being in the EU is unsatisfactory, so being out will feel better, at least for Leave voters, though perhaps not on any terms. Does this mean that, for EU hardliners, the terms should be such that leave voters do feel worse off? Presumably then remain voters will feel much worse off, which may satisfy the hardliners, but Remainers are not the ones deserving punishment. 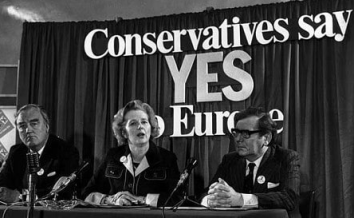 Who in the EU would decide that enough of Britain feels worse off to satisfy the condition and how would they do that?

There is a lack of logic in the ‘not-better-off’ condition. A reasonable assumption about those who value membership of the EU is that they believe that all member states are better off than any potentially eligible non-member. On this view alone Britain could never be better off out than in. Surely that is sufficient then.

Enough logic chopping; the condition is illogical, ill-defined and ill conceived and the outcome probably can neither be measured nor met, to everyone’s satisfaction.

We should not be agitated about the silly condition or the poseurs who make it.