Our previous post ‘celebrated’ the twentieth anniversary of the euro (The State of The Euro); we described how monetary union has failed to increase growth or converge the economies of the eurozone countries. In this follow-up we look at similar failures and the possible consequences if the euro also dies. 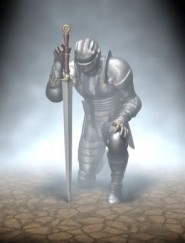 Giving control of monetary policy to another authority, whether voluntarily or by force, is a risky step for any nation because it surrenders vital powers which might be used for interests other than its own. Greece has found itself trapped, unable to use the normal sovereign instruments to restore its competitiveness against stronger economies in the eurozone. The rules protect Germany in particular (and are bent in its favour when necessary). Greece cannot devalue since it no longer controls its own currency, instead it has suffered enforced deflation resulting in lower wages, reduced public services and devastatingly high unemployment.

Meanwhile Italy is on the verge of economic failure after two decades of negligible growth, with its banks insolvent but kept from collapse by ECB magic. Italy’s banks have a combined market value of about €60 billion but €224 billion in non-performing loans. Part of the magic is that their assets include the highest proportion of sovereign bonds in Europe, which under ECB rules are considered risk free.

Well, the market doesn’t agree because Italian bonds yield higher returns than German bonds; it only requires the international ratings agencies to formally recognise this and they can no longer be classed as safe enough to underwrite the banks’ debts. On top of that Italy has accumulated massive Target2 debts it can never repay (the details were explained in Italy Missing the Target).

Basically, Germany has earned a trillion euros in IOU chitties from its export successes, half of which are from Italy. The Germans can use these IOUs to buy Italian (or Greek) products, if they want them – they’d need to want an awful lot of stuff. High value products like Ferraris, Lamborghinis, Masseratis and Ducatis would diminish the credit pile fastest but Mercedes, Porsche and BMW wouldn’t be pleased. There’s other stuff like wine, olives, luxury fashion and holidays that Germans might like and which don’t threaten their own industries, but they they’d need to spend hundreds of billions of euros to wipe out the debts. They’d all be very drunk, dolled-up to their eyebrows and too busy soaking up the sunshine to work – but why would they need to with all that money?

Despite all this the euro remains popular with a majority of citizens, even in the countries worst affected by its faults. Were these countries to leave the eurozone and introduce their own devalued, national currencies (the drachma and lira, say) most citizens would hold on to their more-valuable euros where they can. Similarly those with assets, like property, do not want to see them devalued.

Monetary union failures go hand in hand with political disintegration. The same may happen to the EU, we can already see much popular anger and the rise of dissenting political parties. We can’t predict the end but the dangers are very real and a substantial change is almost inevitable. The longer all this lasts the harder it will be to solve.

Jens Norvig’s paper [1] provides an interesting review of some past monetary union (MU) failures and includes a chart showing 67 of them with their sizes relative to global GDP. Compared with the euro only one of them comes close, the Rouble Zone (RZ), but that was only an eighth the size and was far less connected to world trade. 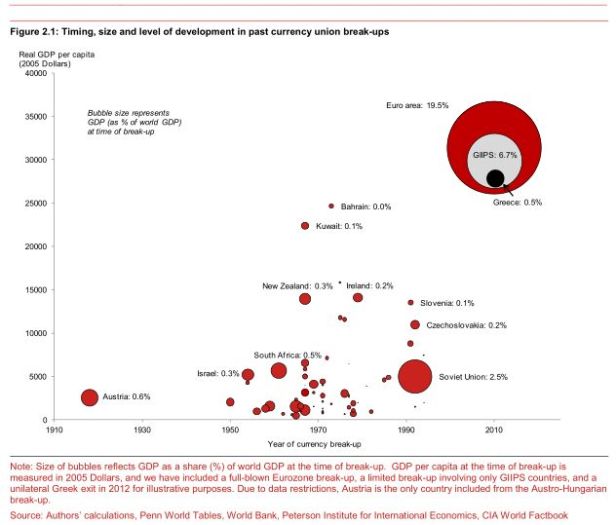 Norvig concludes that the eurozone is “too big to fail” but that didn’t prevent Lehman Brothers collapsing and other, larger banks had to be bailed out by their respective central banks. The eurozone and its banks too will require bailing out; in fact it is happening in disguised forms already but sooner or later will need far greater intervention and restructuring. We’ll return to this and the RZ but first note that the Latin Monetary Union (LMU, 1865-1925, comprising France, Belgium, Switzerland, Italy and Greece) failed largely due to a lack of Italian and Greek fiscal discipline – plus ça change.

Since Britain joined the European project there have been three attempts at forms of MU. First the currency snake (1972-79) which attempted to keep exchange rates within a narrow band from where they started; this was later widened, then abandoned.

Next the Exchange Rate Mechanism (ERM, 1979-98) from which Britain was ejected in 1992; the pound fell, absorbing the shock, and the economy recovered (unlike the Tories’ reputation for economic competence). Now there is the euro which Britain didn’t join, despite the doom forecasts of Blair, the CBI and pretty much the same bunch of no-deal pessimists we have today. We were lucky or we might have been in a similar situation to countries where the euro’s achievements have included: more sovereign debt, capital flight, asset bubbles, high unemployment, and political upheaval. By managing its own economy the UK has escaped the worst of this.

In 2014 the IMF forecast that Italy’s debt would fall each year under its ‘technocratic’ government, imposed by the EU. It hasn’t happened, it’s still around 132% of GDP; the deficit isn’t huge, though its ‘populist’ government is about to increase it a bit and the EU has reluctantly agreed rather than trigger a fallout. The problem is there’s little growth and hasn’t been much for a couple of decades. Even if we forecast a steady state things won’t improve, but most ‘experts’ are predicting global problems which will stress Italy and the EU even more. Demographics aren’t helping either, with the Italian birth rate at 1.37% – thank God for the immigration ‘crisis’ then.

Following the sub-prime crash, Scottish banks were bankrupt but the UK’s central bank saved them (just as well Scotland wasn’t independent). The ECB isn’t permitted to save Italian banks, the EU may be good at bending the rules when it suits but bailouts would be at the expense of Germany and its fellow ‘Hanseatic League’ states in the north. The Welsh and English didn’t grumble much about saving the Scots’ banks but imagine the political fallout if the Dutch and Germans were called on to save Italy’s.

Ultimately monetary unions fail because of politics. There may be enough money in the eurozone to cope but it is unevenly distributed and Mario Draghi, with Jean-Claude Junker and company behind him, won’t be able to redistribute it where it’s needed. A ‘normal’ central bank can delay a crisis for a very long time with low interest rates and bond purchases but the ECB has run out of road unless other nations agree to help Italy, indefinitely.

Around half of Italy’s voters would choose to leave the euro given a chance, and of course that was the choice of half of them when they did vote and elected 5Star/Lega. That means they wanted the lira back, a currency they remembered devaluing every few years (for example, the number of lira needed to buy a deutschmark in 1979 was 443, in 1990 it was 750, in 1995 it was 1,000). The government they elected may have softened when faced with the enormity of an exit, preferring to try softening up the EU if it can, but the sentiment remains. Italy is a net contributor to the EU budget so it sends money to Brussels and gets it back with strings attached. Its contribution will grow after Brexit.

If the Italian government caves in, like Greece’s did, can it survive? After all, the Italians voted to have control. Eventually the Italians must repay their debts or default; they can’t repay such vast amounts from voters’ pockets without a revolt and they can’t simply pay in devalued lira in many cases – those controlled by foreign law – as we’ll explain later.

A new president of the ECB will take over from Italian chief Mario Draghi after 31 October 2019, and that is likely to be hard-line German economist, Jens Weidmann; he is already on the ECB council and voted against Mario’s “whatever it takes” strategy.

Because of the size of its financial sector and its interconnectedness to the world’s financial institutions the UK is extremely exposed to all this chaos. Direct exposure to Italy is limited but the UK lends to institutions that lend to Italy in a very big way.

What will happen after the May 2019 elections to the European Parliament? There’s likely to be a big increase in eurosceptic representation (already they are about a third of MEPs). UKIP gained the most seats from the UK last time despite winning none in the Westminster Parliament, EU voters may well feel they can express their dislike of EU policy with their choice of MEP without facing the prospect of electing a Le Pen or Wilders to run their national administrations.

Monetary union is the most daring and dangerous step the EU has yet attempted to accomplish its mission of creating an integrated, federal Europe. On the eve of its launch it received a dire warning when the similarly-constructed Rouble Zone collapsed but crises are what the Union relies on to force the refuseniks to consent and the project went ahead. Already some of its architects are looking to shift the blame for the euro’s obvious faults away from themselves. We will look at this and possible outcomes in the next post (The Future of the Euro – 2).

Nick Hubble – “How the Euro Dies”