John Lanchester is an occasional writer for The New Yorker and the London Review of Books. In an October edition of The New Yorker he gives an excellent review of the Euro and its failings. Among other things he covers some history of the EU, the Euro, the global crisis, and how these link to give the EU a risky future.

“Just after the First World War, [Jean Monnet] was appointed deputy secretary-general of the League of Nations, at the age of thirty-one. In 1923, he became an international banker; in 1933, he moved to Shanghai, at the invitation of the Chinese finance ministry, and helped fund the expansion of China’s railroads; in 1939, he moved to London to work on melding the French and English war industries; in 1940, he moved to the United States, on behalf of the British government, and added President Roosevelt to a list of friends and acquaintances.”

“All this was a preamble to Monnet’s greatest achievement. In retrospect, it is easy to see Europe’s recovery from the Second World War as inevitable. It didn’t seem so at the time, when Europe was broken, poor, riven by social divisions, and mired in severe problems left over from the war and the simultaneous onset of the Cold War. Europe as a whole needed the German economy to recover, but everyone, especially the French, feared a recrudescence of German power. This was not an abstract issue: Germany required coal and steel, and France didn’t want it to have them.”

“Monnet’s idea was simple: the countries should share. If France and Germany pooled the production of coal and steel, two things would happen: the level of production would go up, because economies of scale would bring efficiency; and, more important, it would be impossible for the two countries to go to war. Neither country could get a jump on the other if their essential industries were inseparably interlinked. The resulting institution, the European Coal and Steel Community, was the first of the entities that coalesced into what is today the European Union.”

“Monnet was a pragmatist … but he also had a visionary streak. He thought that Europe’s destiny was for its nations to grow closer together … The inevitable crises would be opportunities to make countries grow closer together, to give up gradually larger pieces of their sovereignty and move toward a federal Europe.”

That this is still the objective is confirmed by the Five Presidents Report.

“Who wanted a united Europe? Who were the people who saw this process as both inevitable and something to be schemed and strived for? The answer was the pan-European political élite of people like Jean Monnet and his peers. There has never been a popular appetite for the idea of Europe: it was always an élite project.”

This last point is examined further in Disillusion, Disaffection and Denial.

“For about four decades, the flaws implicit in the project didn’t seem important. Europe grew through institutions and agreements that, in the medium term, were immediately and practically beneficial to ordinary citizens. The result was a boom in trade, years of fairly consistent economic growth across the continent, and an unbeautiful but functional patchwork of arrangements in which some countries belonged in the European Free Trade Association but not in the E.U. (Switzerland, Norway, Iceland, Liechtenstein), some countries were in the E.U. but not in the Schengen zone of passport-free borders (the U.K., Ireland), some countries were in the Schengen zone but not in the E.U. (Switzerland, Norway, Iceland), and one country wasn’t in the E.U. (Greenland) but was part of a state that is (Denmark).”

In 1992, the European Union adopted the single currency but did not set up other institutions that would be needed to make it work, such as a federal ministry of finance. This was an economic experiment that hadn’t been tried before on such a scale and among such diverse economies and cultures. 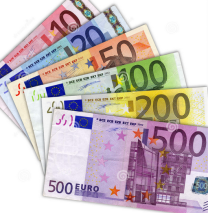 “The idea was to force Europe closer together politically by forcing it closer together monetarily—in effect, to engineer one of Monnet’s crises, the ones that would build Europe. … To raise the stakes even further, there was no exit mechanism for the single currency: monetary union was, by design, irreversible.”

For a while things went well in the eurozone, while Britain did less well.

“The positive numbers, though, concealed growing structural tensions. Because Germany is Europe’s dominant economic power, the interest rate set by the E.C.B. tended to be the one that makes the most sense in a German context. … The interest rate that made sense in the Ruhr Valley, however, made much less sense in countries that were starting to see bubbles. … There were growing risks, though. If those countries [that were borrowing heavily and experiencing bubbles] had control of their own interest rates, the rates could have been raised to slow down the boom, but the countries had, in that crucial respect, given away economic sovereignty.”

When the global financial crisis arrived, in 2008, “[all] Western economies went into recession, but the eurozone countries suffered the most and for the longest.” Unemployment among the EU countries reached 10% and has remained above that level since. Among young people unemployment reaches 40% in some regions. Many countries on the periphery of the EU experienced severe economic contractions and weakened banks. For many economists the Euro should take the blame for this poor performance.

At this point “a complex mixture of international politics, economics, and law meant that the body that stepped in to help the crisis economies was a triple-headed entity, the Troika, made up of the European Commission, the European Central Bank, and the International Monetary Fund.”

“The Troika had s 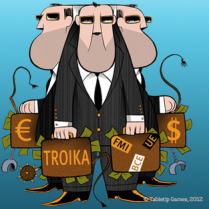 trong views about how the afflicted economies should be fixed.” They demanded austerity and structural reforms and made financial support conditional on implementing their demands. They predicted that, when austerity and structural reforms had had time to work, the weakened economies would recover and grow well. In fact, although they had no choice but to implement the expected reforms, the result was continuing decline, accompanied by growing unemployment and disillusion among the affected populations.

Lanchester then refers to the recent book, The Euro and the Battle of Ideas, (which we covered in an earlier post, France and Germany: Leading but Where?) Lanchester argues that a majority of economists believe that the German interpretation is wrong: “Where others see a crisis caused by weak demand, Germany sees a crisis caused by excessive use of cheap credit, which can be cured only by severe cuts in spending.” He offers Greece as one example where the German view prevailed, disastrously. But, because Greece’s problems are widely regarded as having been self-inflicted, Lanchester turns to Finland as a more realistic example of the failure of austerity – and the Euro.

“Finland has a technologically literate, hardworking, and well-educated workforce, with little corruption, low levels of government debt, and no home-grown oligarchy—in other words, none of the factors that are sometimes seen as the source of problems for the troubled Southern European economies. Even so, the Finnish economy contracted by eight per cent, more than it did during the Great Depression.”

The EU and its Economic and Monetary Union (EMU) can b

e held responsible. An unprecedented experiment, founded in ideology rather than experience, was imposed on economies and cultures that were not able to cope with either the rigours of this imposition or the ‘solution’ to the problems that it brought about.

“The single currency has created a situation of low or no growth and high unemployment, spurring popular anger and disaffection.” The EU’s conclusion? Stronger Northern economies must share responsibility for supporting weaker Southern economies; exactly what the Germans will not tolerate but exactly what the European project demands from ‘ever closer union’.

This disparity between the political reality in the EU’s strongest economy and the demands of the Project’s founding vision is perhaps the greatest weakness of the EU and the most convincing reason that, unless it abandons its ideology, the Project will fail.

“The lack of pragmatism, the willingness to go on doing something that visibly doesn’t work, would have appalled that old fixer Jean Monnet. He would never have allowed the euro to become an end in itself, to be defended ahead of the prosperity and well-being of Europe’s citizens.”

And yet the Euro is seen by its keenest defenders as the crucial means by which integration is to be achieved and the member states brought under the wing of a federal government, applying a uniform solution to a diversity of economies and cultures.

“… completing and fully exploiting the Single Market … should be part of a stronger boost towards economic union…”.

So the aim is union not growth, jobs and stability, which are presented as covers for the true agenda.

“…risk-sharing can be achieved through integrated financial and capital markets“

Risk sharing means in practice, as the five presidents make clear, funding high-risk members by low-risk members. This will not be acceptable to Germany, at least, and will exacerbate the North-South divide.

“Today’s divergence creates fragility for the whole Union. We must correct this divergence and embark on a new convergence process“.

Note: the mandarins would deny that the Union creates fragility for its member states and for the EU itself.

“[T]he convergence process would be made more binding through a set of commonly agreed benchmarks for convergence that could be given a legal nature.“

We have ways to make you converge.

“[A]ll euro area Member States must participate in all Unions“

And to participate fully all EU Member States must become euro area Member States. The EU and EMU are to become the same thing.