It’s possible that Theresa May has changed her mind about the EU, having voted remain in the referendum.

It’s also possible that she is just dutifully implementing the decision that resulted from Parliament passing the buck to the electorate. There is a significant precedent for a change of mind, in the person of Margaret Thatcher.

In 1975 Mrs Thatcher was a keen supporter of Britain remaining in the EEC, as the EU was then. By 1988 she had changed her mind and gave a rousing speech in Bruges, making many of the points we have since made in this blog but nearly 30 years earlier.

The text of her speech, to the College of Europe, can be found here, and there is a link to the video. She made much of Britain’s place in Europe and its history and in later sections recommended actions on issues that remain controversial today. Her opposition was not to the formation of a European community of nations but to the notion that this should be a federal arrangement, governed from above by a supra-national authority. We have picked out some of her remarks, which focus on the things that are wrong with the EU, but first here are a few highlights from her speech to the Conservative Group for Europe in 1975 (before her enlightenment).

“Conservatives must give a clear lead and play a vigorous part in the campaign to keep Britain in Europe to honour the treaties which you, sir, [Edward Heath] signed in Britain’s name. We must do this, even though we dislike referenda. We must support the Prime Minister [Harold Wilson] in this…”

The argument she presented for Britain to remain in the EEC was clearer, more accurate and more honest than most of the case offered by the Remain campaign in 2016, forty-one years later.

By the time of her Bruges Speech, as it became known, in 1988 Mrs Thatcher had changed her mind on some fundamental issues. 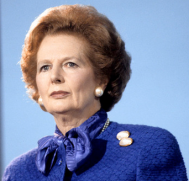 “We British are as much heirs to the legacy of European culture as any other nation. Our links to the rest of Europe, the continent of Europe, have been the dominant factor in our history.”

“Britain does not dream of some cosy, isolated existence on the fringes of the European Community. Our destiny is in Europe, as part of the Community.”

That follows a crisp and convincing portrayal of Britain’s contributions to and receipts from Europe over the previous two millennia. But then she turns to Europe’s future.

“That is not to say that our future lies only in Europe, but nor does that of France or Spain or, indeed, of any other member. The Community is not an end in itself. Nor is it an institutional device to be constantly modified according to the dictates of some abstract intellectual concept. Nor must it be ossified by endless regulation.”

“My first guiding principle is this: willing and active cooperation between independent sovereign states is the best way to build a successful European Community. To try to suppress nationhood and concentrate power at the centre of a European conglomerate would be highly damaging and would jeopardise the objectives we seek to achieve. Europe will be stronger precisely because it has France as France, Spain as Spain, Britain as Britain, each with its own customs, traditions and identity. It would be folly to try to fit them into some sort of identikit European personality.”

“I am the first to say that on many great issues the countries of Europe should try to speak with a single voice. I want to see us work more closely on the things we can do better together than alone. Europe is stronger when we do so, whether it be in trade, in defence or in our relations with the rest of the world. But working more closely together does not require power to be centralised in Brussels or decisions to be taken by an appointed bureaucracy.”

“Indeed, it is ironic that just when those countries such as the Soviet Union, which have tried to run everything from the centre, are learning that success depends on dispersing power and decisions away from the centre, there are some in the Community who seem to want to move in the opposite direction. We have not successfully rolled back the frontiers of the state in Britain, only to see them re-imposed at a European level with a European super-state exercising a new dominance from Brussels.”

“… it must be in a way which preserves the different traditions, parliamentary powers and sense of national pride in one’s own country; for these have been the source of Europe’s vitality through the centuries.”

should change. Mrs Thatcher’s other “guiding principles” cover: reform, enterprise, protectionism and defence; all issues that remain current 30 years later, showing how consistently the EU has continued on its set path and ignored requests to change course.

On enterprise in particular she has this to say:

“The lesson of the economic history of Europe in the 70’s and 80’s is that central planning and detailed control do not work and that personal endeavour and initiative do. That a State-controlled economy is a recipe for low growth and that free enterprise within a framework of law brings better results.”

“Our aim should not be more and more detailed regulation from the centre: it should be to deregulate and to remove the constraints on trade. Britain has been in the lead in opening its markets to others.”

“And certainly we in Britain would fight attempts to introduce collectivism and corporatism at the European level—although what people wish to do in their own countries is a matter for them.”

The Prime Minister finishes on a resounding note:

“Let Europe be a family of nations, understanding each other better, appreciating each other more, doing more together but relishing our national identity no less than our common European endeavour. Let us have a Europe which plays its full part in the wider world, which looks outward not inward…”