Remainers are pleased with their often-repeated slogan that “the people didn’t vote to be poorer.” But they did. Or at least they voted to leave the EU despite being given an official Government warning in a pre-Referendum mailshot that the economy would suffer an immediate shock, jobs would be lost and families would be permanently worse off (see our post Britain Strangled in Europe from April last year). The people voted for freedom despite the possible costs. Perhaps they thought (correctly) that the Government was guessing and they were willing to take the risk anyway.

If Remainers get their way, with the aid of such fabrications, then our exit from the clutches of the EU is at risk; many seem to have little regard for the niceties of democracy and are willing to believe that their own interests should take precedence over everything else.

It’s worth revisiting the deceptions that Remainers will stoop to in order to get their way. Here is a scene from the expensively produced mailshot that the UK government sent out last year: 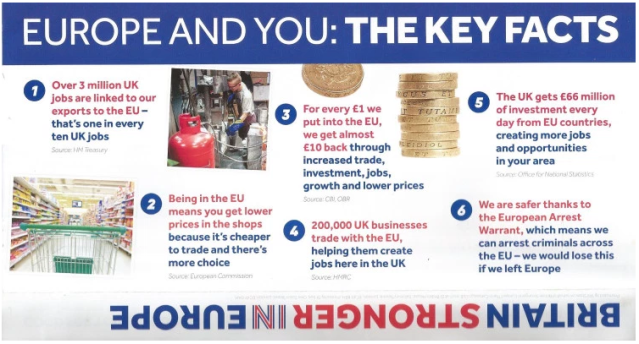 Point 1 is clearly intended to deceive us into believing that over three million British jobs are at risk, which is simply untrue and for which they offer no evidence.

Again there is no evidence to support Point 2; they don’t even say lower than what prices. And it’s untrue that “there’s more choice” inside the EU than going out into the world market to select goods that are not price-protected by EU regulations.

Point 3 should not be believed without evidence, which would probably give it the lie anyway.

Points 4 and 5 repeat the deceit of their first point, implying that all will be lost if Britain leaves the EU. There is no evidence to justify such claims, or to imply that they are true. But they expect us to believe such stuff.

Point 6 is silly as well as untrue: silly because Britain will not leave Europe, just the EU, and untrue because there is no reason to claim that the European Arrest Warrant will not be maintained by any post-Brexit agreement between the UK and the EU.

So “THE KEY FACTS” are not facts at all, merely ‘alternative facts’ as we have since come to know them. The government treated us like idiots but a majority voted against them anyway. And in the recent general election a huge majority voted for parties that, in their manifestos at least, support Brexit.

“The people didn’t vote to be poorer” continues the deception, and the disdain for citizens that is clearly manifest in it.

“Soft Brexit” seems to mean remaining in the EU’s Single Market and Customs Union and therefore under the jurisdiction of the ECJ, which is barely distinguishable from remaining in the EU, except for having no vote on our fate – otherwise known as a “Bad Deal”. As it slowly dawns on ministers and others that Brexit will be complicated, and at times uncomfortable, too many feet seem to be getting cold 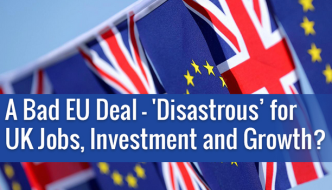 “No Deal” does indeed look better than that. It implies trading on WTO terms, as we do for 60% of our goods exports, and suffering an average 3% tariff with the EU. But our currency devalued more than that. It means importing food from outside the EU at lower cost than the CU/CAP imposes. Our services are little helped by the “frictionless” Single Market; there are masses of non-tariff obstacles and few signs of them being tackled. This is the most important part of our economy and of our exports. There are plenty more such obstacles the EU can erect if they intend to act as our enemies.

EU leaders say so often that they do not wish to punish the UK that we know they do. Sometimes they forget to deny this: “I’m sure the deserters will not be welcomed with open arms,” said Jean-Claude Juncker. “The United Kingdom will have to accept being regarded as a third country, which won’t be handled with kid gloves.”

The intention is clear but we should not be cowed, we will overcome in the long term and the EU’s decline will be accelerated.