A cynic is “a man who knows the price of everything and the value of nothing” [Oscar Wilde]. In relation to Brexit a typical Whitehall mandarin knows the risk of everything and the opportunity of nothing. Except they don’t know the risks, they are guessing at the cost of Brexit using estimation methods already shown to be wrong , they don’t even recognise the price of what happened before (see [1], from which the footnote* below includes the key point that we are making here.)

The economy has performed far better than Mark Carney (or the CBI, IMF and others) predicted since June 2016 – are his (and their) predictions better this time? Probably not, the algorithms haven’t been changed. What is more, his ‘facts’ have been exposed as highly selective and misleading [2]. Carney claimed that the UK was at the bottom of the G7 growth league last year but Italy and Japan are still in the G7 and both grew more slowly. The EU overall was not a lot better despite having more room for recovery from a much deeper, post-crisis recession; it also benefited from huge fiscal boosts, compared with Britain’s tightening. France looks likely to be behind Britain this year. 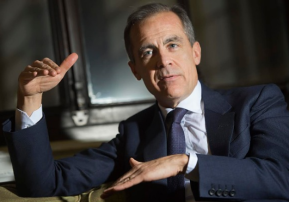 Carney also claimed Brexit has cost the UK 2% of GDP already. What the relevant study actually shows is that the UK grew 2% less than it would have done had it been the USA or Hungary, the main comparison economies. Both received huge stimuluses (which they may pay for later) and Britain always lags the US, which of course hasn’t benefited from EU membership. Carney is, at best, offering an opinion but he has no business using his prestigious position (to which he was appointed, not elected) to play politics.

He says ‘No Deal’ is now quite likely but in spite of that he voted to raise interest rates – how could he raise rates in the face of a coming Brexit catastrophe? His actions speak louder than his words.

The Governor and his civil service colleagues, at the Treasury and elsewhere in Whitehall, are like the commercial managers in corporations (mostly accountants) who look at the worst that may happen to a new venture and decide not to chance it. They are the enemies of change, but change happens regardless and the existing markets they cling to may vanish. Clinging to the EU is not a safe bet, it cannot survive as it is. [3] 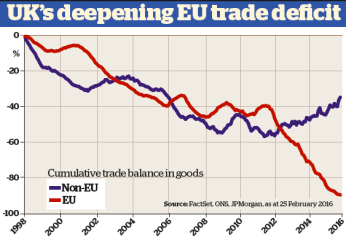 Rather than focus only on the cost of change the mandarins should consider the ‘opportunity costs‘ of no change. The opportunities Britain could miss include new markets, access to new talent from across the globe and the opportunity to improve on lowest common denominator Commission policies. Our trade with the EU has been shrinking relative to its growth with the rest of the world. We face excessive regulation and trade protections that mostly benefit others (and don’t benefit consumers but incumbent suppliers).

Leaving with no deal would be a shock to the economic system but one that Britain can recover from with appropriate policies. Or we could fudge and drag out transition arrangements until change is forced upon the EU itself. The collateral damage to the UK of, in particular, a eurozone break up will be heavy but we can – and should – begin to put some distance between us and them.

* There was no improvement in UK growth in per capita after 1973 when compared with previous decades. [UK] GDP per head clearly grew more slowly after accession than it had in pre-accession decades … The ‘golden age’ growth in the EU6 economies slowed down very soon after UK accession to the EEC. From 1979 to 2007 growth in per capita GDP in the EU6 was only 1.6% per annum, well under half of the pre-1973 rate… After accession, and up to the banking crisis starting in 2007, UK growth was 0.3 percentage points faster than the EU6. The UK’s relative improvement was wholly due to the slowdown in the EU6 … there was no actual improvement in economic growth in the UK itself.