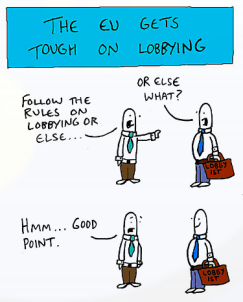 Peter Teffer, who used to be an investigative journalist for EUObserver, has spent many hours looking into how the EU makes its decisions and the influence that corporate lobbyists have on those decision. He summarises his conclusions in a recent article for the online journal [1] and will publish details in his book, which is due out this month.

This post touches, once again, on these issues and quotes from his article, as well as from some of our own related posts. Here is the opener from Peter Teffler:

“Lobbyists have operated in Brussels for almost as long as the European institutions settled down there…it is still the case that corporate interests have a disproportionate influence on EU lawmaking.”

He offers ideas on how this happens, and why:

“One explanation is that the interests of corporate lobbyists often align with the possible political majorities in the complex EU.”

His next quoted comments may offer some sort of excuse for the EU to take short cuts, though we think they should resist any temptation; however, for the EU complexity is not so much a temptation as an excuse to disguise their true federal agenda, which treats the views of its citizens with contempt.

“For an EU directive of regulation to become law, lawmakers need to find multiple sets of compromises: between conservatives and progressives; between North and South; between East and West; between big and small member states.”

“Expert groups often consist of a majority of members that have an economic interest in the sector they give the European commission legislative advice on …Because EU institutions have relatively few staff, it is no surprise that companies are in a position to provide – and pre-select – information which becomes the starting point from which to legislate.”

As an example of the links between the EU and commercial corporations, a previous EC President, Manuel Barroso, was ‘elevated’ to a strategic lobbying post with Goldman Sachs Inc. When the EU Ombudsman, Emily O’Reilly, asked the EU’s ethics committee to review the appointment an EC spokesman stated that the Commission had no intention to review the rules or to refer Barroso’s appointment to the ethics committee, which would have been a reasonable response from an organisation that was serious about its own rules and declared procedures.

A former ECJ judge concluded (see Timely Judgement) that the way the EU bends its rules in favour of the well-connected “infuriates” the public and causes them (i.e. us) to lose interest in, for example, participating in EU parliamentary elections. As an insider, he urged the EU to reform in order to promote its survival; as outsiders we predict that the EU will not reform its ideology and so will decline into irrelevance and termination in due course.

The normal procedure to introduce a new law starts with a bill initiated by the European Commission. The bill then goes through the European Parliament (EP) for approval and to the European Council, which represents the member states. If agreement is not reached at the first reading then the bill, possibly amended, is given a second reading by the EP. In 2004, over half of all the bills went to a second reading but by 2016 this had reduced to zero.

The ‘normal’ process, which can be lengthy but transparent, is by-passed by a series of ‘trilogues’ [2]. Short-cutting the second reading reduces the amount of debate within the Union’s institutions and makes it much more difficult for the public at large to learn what is going on. Lobbyists and other private interest groups have more ready access to the internal discussions, but they by-pass the European Parliament, which then has either to pass each bill that comes before it for approval or reject it, without full access to the reasoning; in practice they pass most bills without detailed scrutiny. As a result excessive, unchecked regulation by the EU results from the activities of busy-body bureaucrats and powerful lobbyists.

Lobbyists and other private interest groups have more ready access to the internal discussions. The public (that is, EU citizens) are not allowed into these discussions, in which minutes are not usually taken; getting hold of any notes that might have been made is difficult because trilogue meetings do not formally exist.

“The EU has a register of lobby organisations, where lobbyists have to register if they want to meet high-ranking commission civil servants or commissioners. The database includes information on who has access badges to the European Parliament and the budget a lobby group has available…The register has its limitations: the information in the register is self-declared and there are no sanctions for submitting false data. …attempts to make the EU lobby register mandatory and applicable to all three main EU institutions, have repeatedly been stalled by interinstitutional conflicts….It is now three-and-a-half years since the commission proposed a mandatory transparency register.”

The European Commission and other EU institutions and agencies need to be reminded that they have promised to include citizens in consultations about decision-making. They often choose to ignore their own treaty obligations in this regard. For example, the European Defence Agency held its annual meeting in 2018 without inviting anyone from civil society, although they stressed that it was important to “get the buy-in of citizens”. Romania, while holding the six-month rotating EU presidency, outsourced the organisation of a debate on energy to the nuclear lobby—which subsequently ‘forgot’ to invite to its discussion anyone critical of nuclear energy. By lobbying, or filling posts on the standards-setting bodies, dominant manufacturers can manipulate markets to fend off challengers. 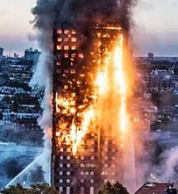 For example, German manufacturers Vaillant and Bosch have several members on the committee that designs tests for central heating boilers (the water volume and temperature assumptions are not appropriate to the efficiency of a domestic boiler). The Building Research Establishment used to set British Standards but the superior British standard (BS4814) had to give way to an EU Directive, with disastrous consequences for Grenfell Tower residents [3]. Entrepreneurs like James Dyson are handicapped by distorted standards designed to protect others; an example is the efficiency rating of vacuum cleaners [4].

European commissioners continue to meet mostly with lobbyists representing corporate interests. According to the Integrity Watch website [5], 70 percent of the meetings Jean-Claude Juncker’s commissioners had with non-politicians were with corporate lobbyists.

Ignoring its own ‘rules’

In a footnote to her report [6], the Ombudsman refers to a European Parliament document that highlights, surely unintentionally, the gap between theory and practice, or between EU’s published claims about what it is and does and how they behave in practice. Here is a sample of their published claims, from their ‘adopted text’ titled Transparency, accountability and integrity in the EU Institutions [7]:

“…non-transparent, one-sided interest representation can lead to a risk of corruption and may pose a significant threat and serious challenge to the integrity of policy-makers and to public trust in the EU institutions…corruption has significant financial consequences and constitutes a serious threat to democracy, the rule of law and public investment”.

We note that each point in the EP document, under the heading ‘Making the Transparency Register as mandatory as possible’(surely it’s either mandatory or it isn’t) opens with weasel words such as: Welcomes, Recalls, Believes, Calls on, Urges, Encourages, Considers, Reiterates, Insists, Asks, Regrets. We cannot find that it decides, let alone instructs the Council or the Commission (or even its own Bureau) to do anything about the lack of transparency, accountability and integrity. So much for the powerful parliament that we citizens are encouraged to vote for. They want us to believe that they practise what they claim, and too many people fall for the propaganda.

Their conclusion is that,

“…citizens’ trust in the EU institutions is fundamental for democracy, good governance and effective policy-making…there is a need to reduce accountability gaps within the EU and to move towards more collaborative modes of scrutiny which combine democratic oversight, control and auditing activities, while also providing more transparency”.

Our conclusion is that the EU provides fertile soil for special-interest lobbying and fails to honour its own obligations. This will continue because genuine EU reform would overturn its fundamental ideology, which has to be obscured by such deceits.