Current and proposed subsidies and bailouts will ensure ever greater divergence between the EU nations’ economies.

When France and Germany (strictly Macron and Merkel, the two powerful leaders) proposed their EU rescue package (18 May) they both opened the way for the Commission and constrained that way. Their proposal gave the Commission approval to borrow money on behalf of the EU (opening) so long as the way the borrowed money was to be used respected the EU’s treaties and financial policies (constraining). Before the proposal France and Germany had disagreed about issuing grants and loans to struggling EU economies; this disagreement remains among other member states.

By now pretty much every economy in the world will need an injection of money to aid recovery from the covid-19 pandemic. Most national treasuries will not have sufficient funds so will need to borrow, and some that don’t have good enough credit ratings must ask for help. Donors will be wary that their aid may be misspent or be merely palliative unless there are strings. On 27 May the European Commission duly issued its own proposal, valued at €¾ trillion, which would involve both grants and loans and set conditions on the receiving countries, in line with but not the same as the Macron-Merkel proposal. The idea is to link the rescue into the next EU budget. More details can be found in many news reports.

This proposal has yet to be accepted by the member states via an inherently slow approval process and is expected to be opposed by some that fear that the rewards of their frugality will be stolen from them, notably the ‘frugal four’ of Austria, Denmark, the Netherlands and Sweden, who argue that EU pandemic bailouts should be loans, not grants, and there should be no joint debt. The task is made harder within the eurozone because the most powerful tools—such as devaluation—are not available to the needful nations.

The Single Market may be forever distorted by unequal subsidies gifted by member states to their own companies (more on this later) and the ECB will extend its bond-purchasing for another year, keeping those funds invested until the end of 2022 at least. Of course it won’t be helping UK firms, wouldn’t now be a good time to relax Barnier’s ‘level playing field’ demands? Also, despite the German constitutional court’s challenge [1] the ECB announced this week that it would add another €600 billion to its Pandemic Emergency Purchase Programme, now €1.35 trillion. The rules must be bent, stretched or abandoned.

The so-called ‘recovery plan’ could, if accepted, lead to further integration or, if rejected with no compromise solution found, put the whole project at risk of break-up. Ursula von der Leyen appealed to member states to support her Commission’s proposal for joint borrowing and grants saying, “We either go all alone, and accept a union of ‘haves and have-nots’, or we will walk that road together“. She is pressing for continuing the road to ever closer union.

One interesting sign of the financial distortion that is expected is that bank shares rose soon after the Commission’s proposal was announced. Banks expect that loans will be channelled through them, which will be profitable—a godsend for them at a time when negative interest rates have destroyed their profits. Viktor Orban, Prime Minister of Hungary, called the Commission’s recovery plan “absurd”, saying it is based on jointly-guaranteed credit and would help rich member states more.

The Economist is a consistent supporter of the EU but is concerned that the proposed rule-bending may not be adequately constrained and, in due course, revoked: “Europe’s bail-outs have a nasty side-effect—they threaten the single market. In normal times such state aid is all but banned by the European Union to ensure a level playing field for firms across the bloc. Restricting state aid…is vital to spare taxpayers, consumers and competitors the burden of a rigged market…France and Germany may seize the moment to try to water down competition rules permanently.” [2]

“A trickle of demands from all over the bloc has turned into a flood. Nearly 200 subsidy schemes and bail-outs worth over €2trn ($2.2trn) have been cleared by eurocrats. …if the rules remain eased for too long, the money sloshing to companies will aim less to rescue them in crisis than to boost their prospects afterwards.” [3] 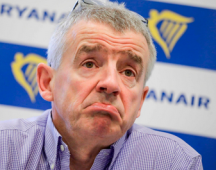 As an example, Germany has allocated €9bn to Lufthansa. Smaller companies fear that their large, subsidised competitors will either swallow them up or use their added weight to disable competition: “How can airlines like Ryanair, EasyJet and Laudamotion be expected to compete with Lufthansa in the short-haul market to and from Germany, now that it has €9bn worth of German government subsidies to allow it to engage in below-cost selling or buy up even more competition for the next number of years,” argued Michael O’Leary, CEO of Ryanair, an Irish airline.

The UK used to speak out strongly in favour of the Single Market and vigorously opposed such risks as are now being proposed. Perhaps the EU is glad to be rid of such a member. But if they want a supportive neighbour then now might be a good time to relax Barnier’s Brexit negotiating mandate.