The Remain campaign deliberately misuses words to enhance our fears. Fear, uncertainty and doubt have powerful short-term effects so markets behave unpredictably and irrationally at first. In the longer term things become clearer and markets start to behave rationally.

Just as the 3 million jobs “linked” to our trade with the EU is meant to imply these jobs will be lost with Brexit, so we’ll lose “access” to the Single Market and hence 44% of our export trade will disappear.

As we’ve said before economics is not a science, however it is logical. For example, if we leave the EU and French politicians (who have said they would want to punish us) successfully lobby for Britain to be expelled from the Single Market (SM) and make us face WTO rules, average tariff barriers of around 3% would apply – both ways. Some economists predict that sterling would fall about 12%, comparable with its (brief) fall when we left the ERM.

Because it doesn’t work well for us we have a negative trade gap of around £10B per month with the SM. Therefore our exports will be much cheaper overall and our imports more expensive, potentially saving our economy billions of pounds. Note here that our trade with the rest of the world is both larger and growing more rapidly than with the SM, plus the balance is in our favour.

Negotiations with the EU will be decided by qualified majority voting and endorsed (or not) by the European Parliament, so France has no veto. The Germans may be unhappy with the French position because they won’t want to see a WTO (9.8%) tariff on their cars – the UK is the largest market in the world for German cars. In spite of the gloom from Remain plus threats from Herr Schäuble and our other Continental “friends” it looks like we’ll be quids in! But markets aren’t that simple.

What will be the effect on our economy when all factors have been taken into account? We don’t know because we can’t account for all the factors. Put both above scenarios into the experts’ models – what predictions would they give? Might the French and Germans agree a third, compromise solution? If circumstances could be repeated in this complex environment economists could become like scientists instead of astrologers. 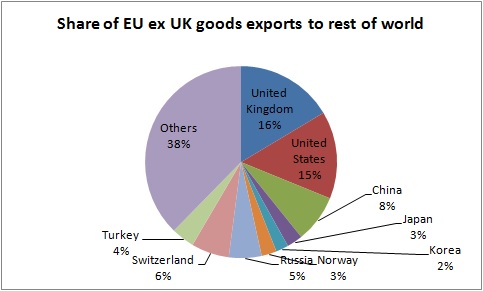 WTO agreements continue to become more liberal. Tariffs have declined greatly since Britain joined the Common Market and in 2015 were abolished between the major countries on 200 IT products, from printer inks to MRI scanners.

We’re not claiming that everything is simple if we leave the Single Market, simply that some institutional experts may have been selective in their choice of scenarios or been selectively and sensationally reported.

Our economic argument is simple but that doesn’t mean it’s clear what will happen. The destructive incompetence of the EU is obvious to anyone who cares to look. EU leaders have taken huge risks with the continent’s economy in pursuit of a non-economic goal and, in spite of the damage to so many citizens, will not deviate from it. This is the mark of idealogues, not idealists. We’re confident we can be successful without the comfort of a smothering EU but we are certainly capable of screwing up the opportunity.