It seems that there is less and less that national leaders can agree on among themselves or with Brussels. It is little wonder that the joint Declaration after September’s meeting in Bratislava had to be so bland and that Juncker is so grumpy about the lack of enthusiasm for the EU project. This post examines some of the issues national leaders are addressing and asks what are the possible implications for the future of the EU.

mitted to resign if the forthcoming Italian referendum on constitutional reform does not go his way. To sustain his popularity at home he needs to be seen to be critical of the EU, hence his remark that the event in Bratislava was little more than “a nice cruise on the Danube”. This despite having signed the joint declaration. He was not happy with the closing statement and is reported as saying that, “if things go on like this , instead of the spirit of Bratislava we’ll be talking about the ghost of Europe.” He certainly has some issues with the proposed EU budget and expects to let Italy do as it pleases despite the rules on deficit limits, as both France and Germany have done repeatedly.

Other senior Italians have linked hoped-for reform of the EU with Italy’s special needs, particularly the need for the EU to modify its competition rules to allow EU companies (i.e. Italian companies) to compete more effectively outside the EU.

Maria Elena Boschi, Italy’s Minister for Constitutional Reform, appealed for a re-launch of the EU project saying, “Unfortunately, anti-European sentiment is not limited to the UK. It is common more or less to all our countries, and it is on the rise”. Her remedy is a stronger Europe, which requires stronger states, including a stronger Italy. She too confounds the EU with Europe and what she says makes sense only with that interpretation, as a stronger Italy would require a weaker EU.

Gianna Pittella, the deputy chairman of the EPP group in the European Parliament, said that the EU’s Stability and Growth Pact is “stupid” and that there is a discrepancy between the Maastricht Treaty, which says that the EU is a union of states and citizens, and the reality, which is that citizens are not included in practice.

Currently, the populist 5 Star Movement, which is sceptical of the EU project, would be likely to win power in Italy if an election were to be held. Luigi Di Maio, a vice-president of the lower house of parliament, said, “We want a consultative referendum on the euro. The euro as it is today does not work. We either have alternative currencies or a Euro 2”. Euro 2 means, for the 5 Star Movement, one currency for the northern members and another for the southern. Its leader, Beppe Grillo, has called for a referendum on whether Italy should stay in the EU. He argues that Brexit signals that the EU has failed.

In France Marine Le Pen, leader of the National Front and a current favourite to win a place in the second round of the presidential election next year, would call a referendum within six months of taking office, should she win. She sees herself as the “defender of the freedom of people to choose their destiny and choose their laws”. In 2005 French voters rejected a draft EU constitution and had to vote again until a majority agreed to it. In 2008 parliament signed a version of the treaty without putting the matter to a national vote. Her National Front came out top in the election to the European Parliament and accuses the EU of chasing ‘ever-closer union’ against the will of the French people. Le Pen accuses the EU of responsibility for the eurozone’s high unemployment and has called leaders of member states to “build a Europe of nations to replace the totalitarian EU that we have today.” A majority (53%) of French citizens polled in a survey earlier this year would like to have a referendum on France’s continuing membership of the EU.

Members of the group are strongly opposed to the EU’s attempt to fine them for not accepting sufficient numbers of migrant refugees in their countries. Hungary has refused to take any and the others have accepted far fewer than the EU quotas required of them.

Robert Fico, prime minister of Slovakia, has said that his country will not accept a single Muslim migrant and the country has put up a legal challenge to the EU’s quota scheme.

The foreign minister of Luxembourg called for Hungary to be evicted from the EU for treating asylum seekers badly. Hungary responded by accusing Luxembourg of helping multinational corporations to avoid paying tax.

Victor Orban, prime minister of Hungary, has said that the Visegrad group will present a plan on behalf of its four members to tackle the EU’s problems. Meanwhile the recent referendum asking voters whether Hungary should reject the EU’s binding refugee quotas was passed by a large majority of those who voted, though a majority of voters stayed away.

Jaroslaw Kaczynski, the head of Poland’s ultra-conservative Law and Justice Party, feels strongly that neither Poland nor other European countries should take orders from Germany. He argues that more power should be handed back to national governments. He believes that the Visegrad group is seeking a “counter-revolution” to bring changes to the structure and decision-making processes of the EU. On its part, the European Commission has issued a formal warning that judicial reforms in Poland are seen as a threat to the rule of law. 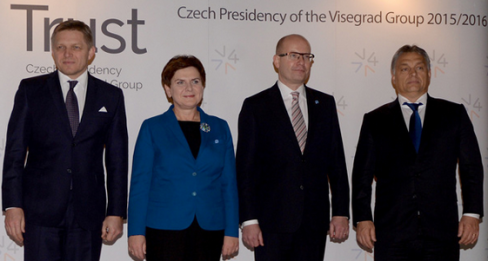