which sprang from the best of motives, nevertheless saw deviousness as imperative to the mission’s success. Not surprisingly, the Project was captured by those who revel in the success of their plots more than successful outcomes for the citizens they’re supposed to be acting for.

An extreme example is the Euro, supposed to bring financial stability but actually intended to force closer union as inevitable problems are solved. However, solutions are proving very hard to find, or at least to implement (see The Euro – Decline and Fall).

We know (from the Five Presidents Report, among other EU documents) that the purpose of the Euro is to push forward the agenda of ever-closer union. From the Euro Summit of October 2014 we can confirm that: “…closer coordination of economic policies is essential to ensure the smooth functioning of the Economic and Monetary Union“. The EMU should be smooth, even if it doesn’t deliver on its promises.

The EU’s Single Market is a misnomer. Of the £220bn of goods and services the UK exported to the rest of the EU in 2015 only 40% was for services, yet they

account for 80% of our economy. The UK Treasury has calculated that only £12.3bn of our exports to the EU rely on being members of the single market for services. Worse, many of the EU’s trade deals with non-EU countries specifically exclude services and those that don’t require free movement of people. Are we facing a tough negotiation for little, if any, benefit?

Let the punishment fit the crime

protection. Under the “Caliphate” in Iraq and Syria (IS/Daesh) the punishment would be death. In the past kinder Christians would express their regret but wish unbelievers well; harsh Christians would want to see them burnt at the stake.

Those threatening us with retribution are the kind of people we are best keeping at arms length. Their lack of confidence in their Project is proportionate to their virulence in wanting to destroy our future; our success might inspire others to question their right to lead.

So Remainers follow Hillaire Belloc’s advice to “always keep ahold of nurse, for fear of finding something worse”.

… but not as we know it. The EU has no problem with voting, citizens are entitled to express their views in referendums. Only they will be ignored or asked to vote again if the result violates the EU’s objectives. We’ve seen this already in France, Belgium, Holland and Ireland. In Greece and Italy governments have been imposed when the people made the wrong choice. It could happen with Brexit if John Major, Tony Blair, Tim Farron and others get their way.

How will the fractures in the foundations of the EU be resolved, if at all? The leaders of the EU show no sign that they may be willing to concede the central goal of the project; the federal super-state. Few, if any, national leaders seem to be willing to challenge the ideology. Indeed many remain committed to it.

If voters were to be asked the question, “Do you wish the EU to be transformed into a federal super-state, with powers overriding those of the constituent states?” we can be sure that very few would answer Yes. No doubt that is why such a question won’t be asked.

Few, if any, of the committed pro-EU seem concerned that a majority of EU citizens would not accept the federalist goal. Do they not care? Do they assume that they will be able to impose the ideology, overcoming any and all opposition? Or are far too many still unaware of the federalist goal, as it has been well disguised under a snow-storm of politically correct pseudo-aims, such as, “It [the EU] is a means to create a better and fairer life for all citizens … and to enable each of its members to prosper.” Surely everyone would vote for that, which is why it is offered as a cover for the true agenda. But you have to ignore the evidence of consistent failure if you want to cling to this ideal.

Guess who’s NOT coming to dinner

EU leaders haven’t invited Theresa May to their end-of-year dinner. The UK is still paying £30 million net per week to be in their club but that’s not enough for a plate at supper apparently. 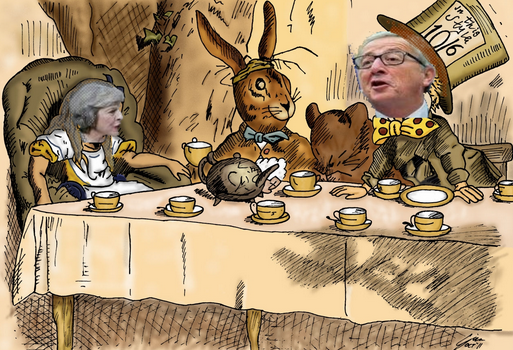