Following up their article on the Greek crisis, covered in our recent post Evidence of Fragility (Part 4), The Economist (TE) has a related article with the subtitle, “Why European institutions cannot handle the Greek crisis”. As the TE is firmly pro-EU we can bring some more balance to our blog by citing it, while also offering an alternative, EU-critical, interpretation on some of their comments.

We can readily agree to this opener: “GREECE’S marathon crisis is at least instructive.” TE says that the crisis offers a lesson in political economy: 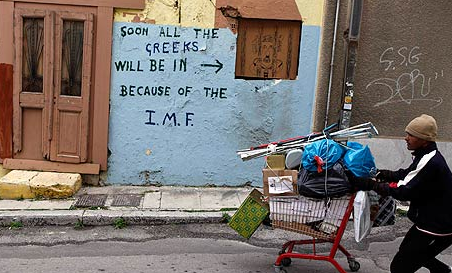 “The beleaguered economy itself is not at the centre of the disagreement; rather it is the European Commission and the IMF and others that are at loggerheads, squabbling over projections of Greek growth.”

TE goes on to argue that institutional wrangling has been a positive feature of the EU, helping to buffer relations between the member states. The EU institutions were developed to provide solutions to conflicts that would otherwise be endemic to a multi-state region. With its history of inter-state struggles, Europe has been unable to collaborate to keep pace economically with major international powers.

The unstated sub-text is that a European Union is necessary to compete economically with the USA and now China and the rapidly developing economies elsewhere in Asia. In other words (ours, not TE’s) national competitiveness has been replaced by international competitiveness and political union in Europe has been necessary to participate in the global competition for trade, profit, status and power (“stronger together”). The world now faces threats at an international level that were previously restricted to geographical regions.

This argument, and our interpretation of it, may be the nearest we have seen to a justification for the continuing pressure to complete political union in Europe, transcending the need for economic union. By political union we infer the progress towards federal government.

“Europe’s supranational bodies are not simply talking-shops or bloated bureaucracies. They are entities apart from the EU’s members, and come to develop their own identity and culture.”

“European institutions were a mechanism through which European infighting could be turned to state building.”

However, more recently this has changed:

“Paradoxically, they themselves [EU institutions and the IMF] have become part of the existential threat facing the European project.”

Because of its economic strength, Germany has come to dominate the EU’s decision making, weakening the role of the EU’s institutions and disrupting the progress towards political union, according to TE.

“When the crisis erupted in 2010 it was soon clear that meetings of heads of government or finance ministers mattered more than what the commission or parliamentarians said. … Greeks see themselves as bowing to Angela Merkel, Germany’s chancellor, rather than to faceless Eurocrats”. 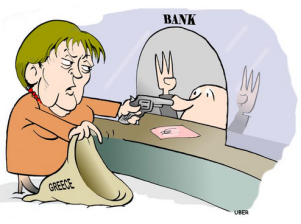 The contradiction between theory and practice, between the goal of European union and the reality of European diversity, has resulted in a pendulum effect but the forces driving the pendulum are now in severe competition, disrupting the relatively smooth to-and-fro and replacing it with what may turn out to be a terminal crisis.

“This dynamic brought back the sting to negotiations within Europe, along with old chestnuts about northern heartlessness and southern profligacy, eroding an already thin sense of European solidarity.”

“The European Central Bank is the exception among EU institutions; its power has grown massively in the course of the crisis. But as the least accountable of the European institutions, its expanded authority does more to undermine the legitimacy of the European project than to reinforce it.”

If we are right that the argument in favour of European union is based on the logic that an international government is required to maintain regional peace, then the same logic would imply that a wo

rld government is needed to maintain international peace. But no one seems to be following this logic, perhaps because no one believes that the international agencies that might form the equivalent of the EU’s institutions, such as the UN, the World Bank, the IMF and international standard-setting agencies, seem capable of coalescing into a world government. And, more significantly, there is no ideology driving it. We would argue that this incapacity at an international level is paralleled by the EU institutions’ incapacity at a regional level. The project is sustained by its ideology, which over-rides its impracticality.

However, TE concludes that, “Europe’s unhappiness with Brussels may stem not from too much eurocracy, but too little.”

Only a few utopians continue to believe that a world government is a realistic and desirable, goal. A sustainable federal government in Europe is also unrealistic and undesirable. We believe that a project that dismisses the desires and expectations of its peoples cannot be sustained and should be closed down as quickly and quietly as possible.