bill currently going through the House of Lords. He is revolting, he says, because British jobs and living standards will suffer if we leave the EU. It seems he wants us to aspire to levels like those in Greece, Italy and elsewhere.

The Greeks, Italians and others imagined Teutonic discipline over their finances would be preferable to leaving control to their own corrupt or incompetent governments. It is proving hard for them to abandon this dream of stability and prosperity but it is increasingly clear that they were misled. Disillusion with the EU has surged. Of course there is a solution, which is to turn the EU, or at least the Eurozone, into a ‘transfer union’ whereby the Germans and a few others use their surpluses to pay for others’ deficits, as happens within the UK for example. This is implicit in the one-state vision of the founders (“completing economic union” as they call it) but election odds don’t suggest that’s going to happen.

“There is no plan for Brexit,” scream the Europhiles. That could be true but there is a strategy, which is to do what it takes to have an economy open to the faster-growing countries and trading blocks of the world (not much like Trump’s strategy then). We hope a plan is indeed coming together in Whitehall but it will need to be flexible as negotiations and circumstances develop. “There is no plan for remaining in the EU”, we could also answer – if the EU goes belly up, as seems increasingly possible, what is the plan or will it be too late to have one?

The EU establishment (especially the ECB) has been great at playing “Keepie Uppie” with the Euro but how much longer can they keep the ball in play? Greece, now on

the brink of its fourth bail out, has a tiny economy, about 2% of the total Eurozone’s GDP. Italy’s is ten times larger; it won’t be easy to keep that in play as its debts spiral and its banks wobble. If Italy falls it will rattle the world’s economy but shatter the EU’s stability, and surely kill off the Eurozone.

Actually, at some stage the citizens of the EU are likely to pay for all the debt in the PIGS (sorry GIPS – Greece, Italy, Portugal and Spain). When the European Central Bank (ECB) started buying up sovereign bonds through its QE (quantitative easing) programme it effectively nationalised the debts across the Eurozone. The money returned to the constituent banks and thus to their creditors has largely been reinvested in safer places, like Germany and Luxembourg, in the form of credits. Luxembourg has well over three times its GDP in such credits but they could prove pretty-well worthless if the Euro collapses (due to a Le Pen victory or Banca d’Italia failure, say). How would the poor Bourgers cope?

The EU is seen by many as primarily a project for peace and free trade that will enhance the happiness and prosperity of all. These are fine objectives but the EU has far grander ideas which don’t necessarily enhance these principles, indeed they seem to be harming them. The seeds of the great wars of the last century have shrivelled, are new ones being generated?

The End of the World is Nigh for Britain, and has been for a while, according to Heseltine and others, but the date has become less certain. The experts Lord H quotes are the same ones who forecast the end in June 2016 or soon after. 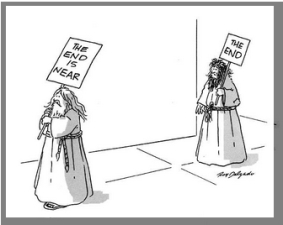