EU Finance Commissioner, Pierre Moscovici (who is a former French finance minister), asks that the EU should give Emmanuel Macon a chance. He said that his victory was a good signal for Europe because the French had chosen to beat extremism. He didn’t mention that about 11 million French citizens did vote for ‘extremism’ or that many of the two-thirds who voted for Macron did so only because the alternative was worse, in their view.

Moscovici said that Macron “will have his heart set on making progress on eurozone governance and economic policies”. He believes that Macron will be a powerful advocate for a eurozone budget and finance minister (proposed in the Five Presidents Report).

“Whether conditions will be entirely favourable, that’s another problem,” he noted, adding: “It will [take] more debates and exchanges to find a compromise, which is necessary if we want to reduce differences within the eurozone” (from the EU Observer website, 11 May).

He may be hinting at the challenge Macron will face to persuade Germany to agree to further deepening of economic and monetary union, which would involve a common budget, tax and insurance policies (see our post France, Germany & EU). Macron is also seeking economic transfers between eurozone member states, arguing that the common currency will not survive otherwise.

“[Without transfers] you are just fuelling the demagogues,” Macron said in an interview with the Financial Times in 2015, adding: “Without transfers you will not allow the periphery to converge and will create political divergence towards extremists.” (From the EU Observer website, 9 May.)

Previously Jean-Claude Juncker, European Commission President, had said that the EU has a particular problem with France, because it spends too much and in the wrong places. J-C, while in Berlin, said that France will have to compromise with others because “Germany is not alone in speaking out about a policy of stability”. He did say that he agreed with the need for a eurozone budget, which is one of the ideas that Macron is pressing and that Germany will likely resist. While in Berlin he warned that “not all euro member states agree that someone based in Brussels or somewhere else should call the shots on budgets instead of national parliaments“.

The EU Observer reminds us that “any major change in the functioning of the European monetary union would entail EU treaty change, which requires large-scale negotiations and the unanimous agreement of all EU member states.” This possibility is regarded as impossible for the foreseeable future.

The day following his inauguration (14 May), the new French President visited Berlin, where he met and was joined on the podium by Chancellor Angela Merkel, who said earlier that “I don’t see that changing our policies would be the priority.”

At their meeting Mrs Merkel said that she and Mr Macron shared a joint conviction that they need to deepen the European Union (BBC news). They agreed that they would work closely together

on defence, eurozone reform and reducing bureaucracy. Mrs Merkel also said that it may be possible to change EU treaties in order to reform the eurozone.

“From the German point of view, it’s possible to change the treaty if it makes sense,” she is reported as saying. “I would be ready to do this, but first we will work on what we want to reform.”

Without flatly contradicting her earlier remark, the Chancellor was using suitably ambivalent diplomatic language in this context; her earlier context was the forthcoming German general election. It is also possible that she was responding to the advice that she needs to show the French public that Germany is willing to move on reforms to the EU and the eurozone. However, we note that Mrs Merkel’s earlier remark was crisp and specific, while her diplomatic follow-up was vague and non-specific. Her “if it makes sense” and “but first…” give enough clues for us to judge that she has not changed her mind, so the challenge to reform the EU will remain substantial. 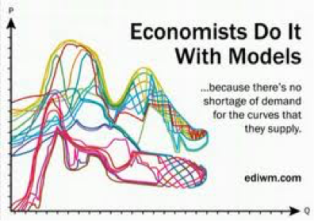 “The high uncertainty that has characterised the past twelve months may be starting to ease. But the euro area recovery in jobs and investment remains uneven,” Moscovici noted.

Unemployment is slowly coming down and also the EU general deficit. The overall forecast of debt level, relative to GDP, has also been lowered a little.

We note that these improvements parallel those in the world economy generally and so cannot realistically be credited to the performance or policies of EU leaders. The EU’s economy is strongly linked to the wider economy so it would be surprising if it did not show some variability matching that externally. 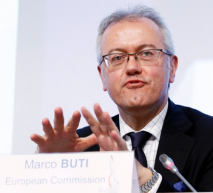 rned, in the same context as the revised forecasts, that “the sentiment of being at the losing end of technological innovation and globalisation that feeds populism is not gone. It will only fade if economic and structural policies determinedly contribute to closing this divide by moving to a more inclusive growth model.”

This illustrates the way that EU views are blinkered by their ideology; they attribute populism to a peculiar “sentiment” and believe that “a more inclusive growth model” will solve this. They don’t want to explain the causal link between their growth model and the sentiment, probably because there is no such link.

In sum, Macron wants more EU because he believes that only that will resolve the problem of populism and Merkel wants the EU as it is because that benefits Germany. Moscovici asks that Macron be given a chance to resolve this contradiction.