It is of course possible that Brexit will turn out to be a disaster for Britain, and it could be if we don’t take suitable action. We believe that Britain will cope, in part because of our history and experience and in part because the EU is itself failing, perhaps terminally. 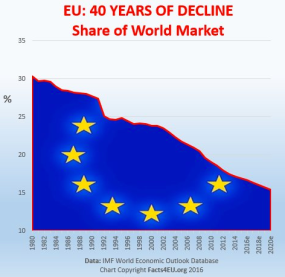 Some doubters claim that nobody wants to buy anything from us, which perhaps refers to what they see as our declining manufacturing sector. This is actually a myth, which we’ll explain in a moment. Meanwhile remember that the relative decline of manufacturing’s importance has occurred whilst the UK been an EU member, so Brexit is not the problem. Also manufacturing has grown in Britain, just not as quickly as services; it is now a smaller proportion of GDP than it was in the ‘70s.

‘Manufacturing’ means the production of ‘hard’ goods (things you can stub your toe against) but as an economy develops and becomes richer people buy proportionately more ‘soft’ goods, by value. These include digital services, a hugely important part of any modern economy, but also things that give vital support to a successful manufacturing sector – such as finance, logistics, communications and law – most of which are not freely ‘tradable’ within the EU’s Single Market.

The UK’s economy has prospered relative to the EU average through growth of its service industries. The Single Market scarcely applies to services and in fact many non-financial obstacles apply, including regulations that seem designed to damage our firms; examples include the art and financial markets. We trade our services (and goods) successfully outside the Single Market, we have a positive trade balance with the rest of the world whilst running a massive deficit with the EU. Year by year it represents a diminishing part of our trade.

Britain has a strategic advantage in services and successfully exports them to the rest of the world (RoW), but not to the EU, which discriminates against them and so badly disadvantages us. The UK has a £30 billion trade surplus with the RoW (including services) and a £60 billion trade deficit with the EU (mostly in goods, especially German). By the way, the RoW is easily our biggest trading partner now and growing relative to the EU; the USA is our biggest trading partner country, 50% bigger than Germany – again, we have a surplus with the former and a massive deficit with the latter. China is our third biggest export country.

Britain’s strategic advantage for services is due to our language, our legal system and our historic reputation but protectionist barriers in the EU prevent us exploiting it. The Single Market is heavily biased in favour of hard goods and agricultural products, the Euro further intensifies Germany’s advantage in the former and Germany is draining life from its partners – in defiance of clear treaty agreement (notably the Macroeconomic Imbalance Procedure).

A TV today costs far less in real terms than it did in 1973 (when Britain joined the Common Market). Yet today’s TVs do so much more, with a far-bigger screen, many times more channels and on-demand viewing. Households typically own several TVs; more TVs are manufactured at a lower cost. Compare that to a cup of coffee at Starbucks, which counts as a service so is not covered. Manufacturers have to work hard to increase their market by value; innovation is one answer. Dyson can charge a premium for its efficient vacuum cleaners but, at the request of German manufacturers, the EU set energy regulations that disadvantaged Dyson products, though this has now been successfully challenged at appeal, after several years struggle.

Brazil, Turkey, Australia and the USA are all keen to start work on agreeing free trade agreements (FTAs) with Britain. The Trade Secretary, Liam Fox, is soon to meet US trade representative, Robert Lightthizer, in Washington – we must be near the front of the queue. That’s because we have the world’s fifth largest economy – or sixth in today’s dollar value (swapping with France), given the post-Referendum devaluation.

Not that this means that France has actually improved relative to the UK’s surprisingly vibrant economy where employment, tourist spending and exports are all considerably up (so too though is inflation but at 2.9% that’s not abnormal in recent decades). 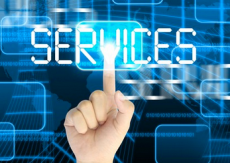 When we escape the playground bullies of the EU, who want to punish us, we still face dangers in the adult world. America uses the outrageous privilege of its currency’s domination of world trade to fine banks what it thinks they can afford, not in proportion to their misdemeanours. And not just banks, it has fined BP for killing 11 people and demanded ‘compensation’ for businesses entirely unaffected by the Gulf oil spill, whilst letting off BP’s American subcontractors with small penalties. Compare the dollars-per-death with Union Carbide’s killing of thousands at Bhopal, the world’s worst industrial disaster.

The US, like the EU, is a monster we have to treat with care and respect. Brexit will not be easy but we can do it and we can be more successful than by staying in a fractious, declining union which refuses to change direction.