In any negotiation conducted in public, as this one is, both sides will use their public comments as part of their negotiating tactics. And commentators will add their own interpretations, which cloud the issue still further.

Here is a sample of the public comments from the two sides:

Jean-Claude Juncker, President of the European Commission: “I find none of [the UK government position papers] truly satisfactory.

“We need to be crystal clear that we will begin no negotiations on the new economic and trade relationship between the UK and the EU before all these questions are resolved“.

(The EU has previously said that it will not discuss trade issues with the UK until it has resolved three issues to be included in a Withdrawal Agreement.) 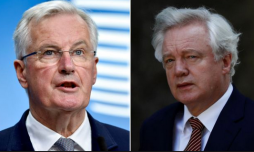 David Davis, lead negotiator for the UK and Minister for Exiting the EU, says that the UK wants the current week of talks to be about “driving forwards the technical discussion across all the issues“.

A spokeswoman for Theresa May said: “We are seeking to agree by October Council that we can move to talk about our future relationship.”

Former UK foreign secretary William Hague – echoing the views of many – says it is clear that the EU is “giving Britain the run around“.

The BBC’s Europe correspondent Kevin Connolly said “the British perception of the talks is more positive than the EU’s“, and added UK officials were “puzzled” at how dismissive Mr Juncker was of the papers.

The UK has made a generous offer on EU citizens rights and a suggestion on the Irish border as well as saying they are prepared to discuss a fair financial settlement. The EU has suggested nothing on the first two points and huge but floating indications for the third; this despite insisting these are the first, vital items to agree. They “cannot be serious” about wanting an agreement, other than a complete capitulation.

To see if we can get some sort of grip on what is going on, we’ve compared two documents, one from each side.

They are the EU’s Position Paper on Governance (we reviewed this in The Withdrawal Method):

and the UK’s Partnership Paper on Enforcement and Dispute Resolution:

The EU’s position paper has this: “[where the Joint Committee] is unable to reach a solution between the two parties, the matter may be referred to the Court of Justice…”.

These two ‘positions’ may be regarded as flatly contradictory, since either the UK is subject to the jurisdiction of the CJEU or it isn’t. However, they can also be interpreted as leaving room for negotiation, between “may be referred” and “direct jurisdiction” (our emphases).

Other clues in the documents suggest that one side is negotiating while the other is not.

EU: “All rulings given by the Court of Justice pursuant to the provisions of the Withdrawal Agreement are binding on the Union and the United Kingdom, and are enforceable in the United Kingdom under the same conditions as those laid down in Article 299 TFEU.”

UK: “There are a number of existing precedents where the EU has reached agreements with third countries which provide for a close cooperative relationship without the CJEU having direct jurisdiction over those countries.”

From a few quotations from just two documents nothing definitive can be established beyond doubt. However, if the EU is putting up a non-negotiable position and the UK is responding with a negotiating position, then there is no likelihood of agreement being reached. And commentators may choose to interpret the difference as the EU being serious while the UK is frivolous; an unintelligent interpretation.

In a negotiation it’s not necessary to start from a complete plan, or two opposing plans, and knock it or them around. You can start with ideas and principles, then work together to find a mutually satisfactory solution. The second approach assumes both sides want to reach an agreement, but clearly the EU is seeking a knock-out win.

The UK is clearly rejecting (“direct”) oversight by the ECJ, which is (“may be”) a fixed requirement from the EU. So the UK government may merely be making sure that blame for failure will lie with the EU, which is a sound defensive position if not a good negotiating one.

The UK paper proves that there is precedent for the EU and UK legal systems to cooperate without granting absolute jurisdiction to the ECJ (CJEU). To insist otherwise would be to make an exception of the UK and thereby prove the EU’s determination to create road blocks to an agreement. The EU cannot reasonably ague that UK justice is inferior to others with which they have already reached an accord.

If the EU refuses to budge on the ECJ issue, they will clearly not be negotiating (and so will give the UK government the excuse to blame them).

We think that the UK paper is a valid step and either party could now make a proposal. In a sense the EU has, by making a totally unacceptable proposal, unsupported by any precedent. And it is so much easier to find fault with a complete but imperfect fit, you can then ridicule its imperfections rather than engage constructively. Perfect, if you have no intention of being constructive.

It seems to us that any idealised union will be imperfect in practice and the EU is far from perfect; this should not be contentious. However the path the EU is on is a bad one, towards an over-regulated superstate, and it will require a destructive collision with reality to change direction. The benefits of more devolved power arise from experiment and competition plus an acknowledgement of culture, history and local identity.

Perhaps supporters of the EU’s trajectory also think a Global Government would be a good idea. In fact it would probably stifle innovation and be liable to takeover by despots or at least by remote, unidentifiable powers. We see the latter already in Brussels which has the largest body of lobbyists outside Washington. It is as if the EU wishes to challenge the USA on its own terms (politically, militarily and economically) by taking on all its worst aspects and none of its better ones, such as not continually draining power away from local counties and states and having directly accountable representatives at federal level.

We believe that the UK paper on dispute procedures is sound because it seems to do two things; first to lay out the features that are open to negotiation and second, by implication, to indicate those that are not, for example oversight by the ECJ. It isn’t a list of what the UK demands (a mandate), which is what so many commentators seem to want, as if that would give them some sort of certainty, or at least some headline fodder. It’s a pity that the commentators haven’t worked through the rigid mandate presented by the EU and seen just how unacceptable it is. So commentators demand something specific – “substantial” – which they then can’t be bothered to analyse.

We think the EU is demanding something substantial from the UK – chapter and verse – so they can just say no. This confirms that they are not negotiating, just posturing while waiting for full compliance.

The point is that the Commission and the 27’s leaders have given Barnier an absolute mandate which he cannot negotiate. Therefore we need to talk to the 27 leaders, or some of them. But the response is that we need to talk to Barnier. He, in turn, must say “I can’t change our position unless the 27 agree”. And so on, ad infinitum.

A round, to the tune of the hymn:

The EU has a clever ploy,

It never gives up ground,