How are Italian political parties proposing to restore their voters wealth prospects? 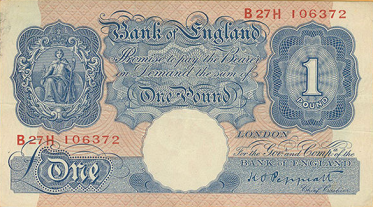 “I promise to pay the bearer on demand the sum of one pound,” signed Montagu Norman. Those old enough will remember the pound note that stored a bit of your wealth, backed with a promise from the Governor of the Bank of England to return your wealth when you needed it to purchase something or pass on his promise to someone else. That used to mean the Bank would give us a pound’s worth of gold if we demanded it, now we simply trust that our government’s paper promises will (more or less) keep their value, despite the Governor’s personal commitment having gone from current banknotes. Without trust money doesn’t exist. Most Italians trust that they’ll get a euro’s worth of wealth when they need it, the trouble is they don’t have enough of them.

Italy’s next general election is just a month away, it could be a big test for the EU and its currency union. Despite some recent growth (due to world economic recovery) unemployment is still over 11% and most Italians are poorer than they were a decade ago. The number of people living at or below the poverty line has almost tripled since 2006, to 4.7 million last year, nearly eight percent of the population. Many have come to think that their currency is a scam for the benefit of Germany, at their expense. Opinion polls show that eurosceptic parties, left and right wing, now attract support from two thirds of the population. Accordingly some of these parties were planning to leave the eurozone but have now decided that is much too challenging. Instead they plan to undermine it in a way that could crack the rotten edifice into pieces.

Central government debt was the third-largest in world at the end of 2016 at $2.3 trillion, way beyond what is regarded as safe and what is permitted under eurozone rules. Italy must restore growth, somehow. It has been stagnating since the mid-90s but since 2000 German per capita income increased about 20% while Italy’s declined by 5%. The radical parties intend to ignore the ECB (run by their own Mario Draghi) to get the economy moving again, first by borrowing more, if anyone will lend, or by issuing government IOUs – technically called ‘zero coupon treasury notes’, which are a promise to pay at a defined later date but without interest payments (unlike standard ‘gilts’). In other words this is money, just like pound notes were. It would be a parallel currency to the euro – illegal but hey, “Non importa. Chi se ne frega”. Who the hell cares? We’re sure Draghi’s people would, and the Bundesbank in particular.

There is no way the German people will agree to bail out the Italians, that would be like Greece times ten. There is a limit to the forbearance of its neighbours, especially given the high level of tax evasion in Italy (like Greece). But as the eurozone’s third largest economy Italy’s is too big to fail and for the Euro to survive as it is. A debt crisis in Italy could cause the eurozone’s disintegration and might also trigger global financial chaos.

It’s hard to tell what might happen at the election, opinion polls have proved unreliable in Britain, the USA, France, the Netherlands and elsewhere;

sometimes voters opt for the comfort of what they know, which is not comfortable for most Italians, and sometimes they leap into the unknown. The eurosceptic parties have some radical proposals to meet the situation. Forza Italia (Berlusconi’s party) proposes a flat tax, possibly set at 23%. This has been implemented in a number of countries of the old Soviet Union with apparent success. However it coincided with other radical changes, like the introduction of capitalism, so the correlation is hard to determine.

The left wing Five Star party proposes a Universal Basic Income (what level can they afford?) This has never been tested at scale. A Finnish experiment has attracted widespread interest but is deeply flawed because the small number of recipients (2,000) were selected from people already receiving benefits, which voids the whole purpose.

Suppose the election result matches the polls, that would be a victory for the sceptics but no party would have a majority. In Germany the socialists and conservatives look on-track to renew their grand coalition. 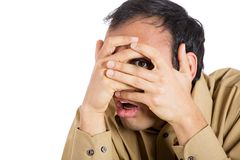 If this happened in Italy and resulted in flat taxes, universal basic incomes and a parallel currency to the euro (none of these are exclusively left or right territory, so why not?), the world would look on in fascination, perhaps with hands shielding eyes in case of a crash. If they couldn’t put it together one or other side might form a majority government with the centre, the europhiles of Matteo Renzi’s Democratic Party, but what compromises would result? It’s too hard to call. 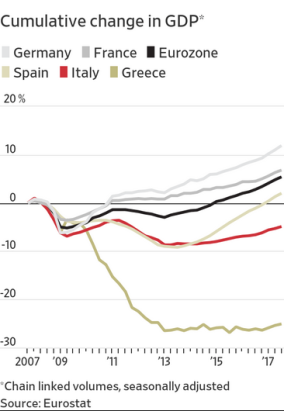 We hope the Italian people will try to move out from their present circle of hell; we hope too that the EU will finally see the errors of their current, rigid policies so that their suffering is minimised. Should that happen it could trigger a re-evaluation of the Treaties, perhaps on the lines (reluctantly) suggested by the Commission President himself in his 2016 State of the Union address (see our State of the Union 2016 post). Italy could then be ‘relegated’ to an outer ring of countries affiliated to the Union but less integrated than core countries like France and Germany. No doubt Greece would join Italy, and probably Portugal and others too. Whilst there’s a restructuring on offer no doubt the Visigrad countries would want to define a ring for themselves. Could there even be a place for Britain in the farthest orbit? That could revolutionise the Brexit negotiations – hold your breath!