We have finally agreed something with the EU – to extend the negotiations for an extra 21 months. Under the EU treaty rules we could have agreed to simply extend the Article 50 period beyond the minimum two years. Instead we will have left in theory in the minimum time but hardly in practice.

We will still be paying our full whack, we won’t have changed our immigration rules, our fishes can still be caught by EU vessels under CFP quotas and we will be subject to all current and future EU laws and regulations during the ‘transition’.

But there are some important differences from simply extending the period. First, we won’t have a vote on anything the EU decides. But it’s not all bad because we can negotiate and sign trade deals with other parties, and that’s a whopping great concession compared to all that’s happened until now. Also the EU has dropped Spain’s veto with respect to Gibraltar. These were massive road blocks for the UK which suggests that perhaps the EU realises it does need an agreement after all. 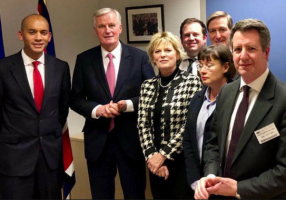 They could have saved a lot of time which would have helped sort out what hasn’t been agreed yet, like the Irish border and the terms of any future trade deal. Probably the resistance of British Remainers, especially MPs, is what encouraged the EU to hold out for the maximum it could get, or even for a reversal or abandonment of the Referendum result, after all this is what it achieved in Denmark, France, Ireland, the Netherlands, Greece and effectively in Italy (an appointed technocratic government to continue failing EU policies). It was an unbeaten run until now, not that we’re quite free yet.

Of course “nothing is agreed until everything is agreed” as Barnier and Davis keep reminding us, so in about two and a half years we may have got nowhere at all and be just about to “fall off a cliff”. Then again the chances of the EU being in a much weaker position by the end of the (extended) negotiating period are much increased, principally because of the calamitous Euro project, the ending of QE plus the raising of interest rates, and the increasing influence of extreme left and right (populist) parties. The economic interests of Germany and a few of its northern neighbours are totally different from the rest and the political mindsets of the French and German governments are at odds with most of the others. From this mess a tolerable result for the UK might be achievable.

Things are looking up – slightly.