When you are in charge, and not subject to voters’ wrath, you can do much as you please. A senior appointment and comments from the President of the European Commission reveal the underlying attitude. 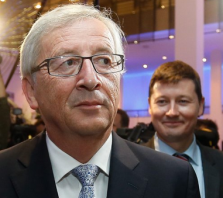 On February 21 Jean-Claude Juncker called a short-notice press conference to announce that the European Commission had appointed Martin Selmayr, previously head of cabinet, to the post of Secretary-General, effectively the head of the EU’s civil service. What interests us, and others, is the process by which this appointment was made and the disdain it shows that the Commission has for due process, let alone for the European Parliament and its citizens.

The EUObserver, usually a keen supporter of the EU, had this to say in summary, “In the Berlaymont, just like in the court [of Louis XVI in 1789] at Versailles, the commission in its final days gives the impression that princes, favourites and faithfuls act like if what is good for them was good for the general interest, refusing any criticism or questioning.”

Here are some comments from Parliamentarians:

Hans van Baalen, who leads the Alliance of Liberals and Democrats for Europe (ALDE) in the European Parliament, said, “If this happens in Burkina Faso, that country would no longer receive any support and we would say: that is not how you govern a country.”

Francoise Grossetete, vice president of the European People’s Party (EPP), said, “Appointments mustn’t mean adopting powers in a higher administration thanks to arrangement among friends or to the detriment of people lower down.”

Gyorgy Schopflin, MEP from Fidesz in Hungary, said, “When it suits the Commission, it ignores the rules, meaning the rule of law.”

Dutch Liberal MEP Sophia in’t Veld said, “The Commission will have to choose what is more important, the career of Mr Selmayr or the credibility of the European Union”.

The four quotations illustrate, respectively, four characteristics of the EU that we have often pointed out ourselves: harsh treatment of countries outside the Union; corruption and disdain for the ‘lower orders’; selective application of treaty obligations; and lack of credibility, arising from the gap between words and deeds.

The Parliament unanimously voted to launch a probe into Selmayr’s appointment, illustrating the fragility of the EU, although the Parliament does not have the power to overturn the appointment.

Jean-Claude Juncker himself said, in a press release, “The next 20 months will be decisive in fully delivering on a Europe that protects, empowers and defends. I need the best team in place. This is why I want Martin Selmayr as the new Secretary-General”.

By “Europe” he means the EU and in practice, as this incident shows, EU priorities are to protect, empower and defend itself.

EU arrogance rears its head in another matter, in which leaders show a similar disdain for due process, for their own rules and for lesser beings.

Manuel Barroso, former President of the EU Commission and now a lobbyist for Goldman Sachs, met Jyrki Katainen over a beer in a hotel bar last October in what Kaitenen says was a private chat between two friends. In a letter seen by the EUobserver, Martin Selmary said, “The [commission] vice president [Katainen] made it very clear that such an activity [lobbying] was not carried out by Mr Barroso“.

However, the meeting and the EU’s response has aroused much ill feeling. EU Ombudsman

Emily O’Reilly has suggested that the meeting could be considered as lobbying, adding “matters discussed, trade and defence policy, may be of interest to an investment bank such as Goldman Sachs.” She has asked, as the EU’s accountability watchdog, the EU Executive to refer back to its ethics committee their approval for the appointment of Barroso to Goldman Sachs and to state clearly how Barroso should be treated by Commission officials.

A Commission spokesman has stated that the Commission has no intention to review the rules or to refer Barroso’s appointment to the ethics committee.