The EU is using the Irish border in an irresponsibly dangerous way. There were two sides in the Troubles and the EU’s use of this issue, while pandering to Sein Fein, risks re-igniting the war from the other side. So much for its supposed mission to bring lasting peace to Europe; in practice the super-state matters far more.

We’ve opted to leave so it’s up to us to fix things, says the EU. We could take the simplest approach: do nothing. If we don’t erect border controls then it’s up to the EU to do so if it wants – we could offer reasonable help if they wanted it – but we impose no tariffs and offer ‘unilateral recognition’ of standards.

Of course that would cause chaos for the EU if it tried to stick to its model of maximum trade friction but the problem would be back where it’s created and the Garda Síochána would have to deal with the smugglers. Leo Varadkar deserves the hassle, previous Taoiseachs have been more sympathetic about Brexit.

Staying in the Customs Union but outside the EU would mean that any Free Trade Agreement the EU might make with, say, China or the USA would apply asymmetrically to the UK. Whatever privileged access these countries gained for their products, once inside the CU borders they would be free to go anywhere within it. But the UK would not have agreed an FTA with those countries so it will not share the privileges granted to EU members. This is the position Turkey finds itself in. The UK would have to try to agree identical FTAs so as not to be disadvantaged – hardly an independent trade policy.

You could call the Customs Union an anti-Free Trade Agreement in that it discourages free trade with those outside its walls. It stimulates internal trade at the expense of world trade and so ultimately damages overall growth. We can at least see the correlation in practice; EU countries overall have grown on average more slowly than other major trading blocs for decades. Anti-competitive structures do not encourage innovation and productivity. Germany is one of the exceptions of course, partly because of the distortions of the euro but also because common tariffs disadvanage outsiders, such as quality Asian car-manufacturers for example. 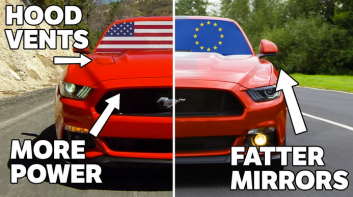 German car makers are worried. Trump has highlighted the disparity between the duty on cars imported to the USA (2.5%) and those imported to the EU (10%) and they fear that they will be the next target in the trade war that has started. Together with Brexit their two largest markets are under threat. “I am very worried. Let’s get rid of the tariffs and rely on mutual standards on both sides of the Atlantic,” said Bernhard Mattes, president of Germany’s auto federation. To comply with WTO rules the EU would have to abolish tariffs on vehicles from all countries including Japan, South Korea, China and the UK after it leaves the Single Market.

Ninety percent of the companies in the UK’s FTSE100 and USA’s Fortune500 fifty years ago are no longer in these indexes or no longer even exist (remember ICI, GUS and Norwich Union?) In many cases this is because these large corporate companies were full of experts who evaluate the ideas and business plans of their new product innovators in terms of risk rather than opportunity, then decide it’s safer to stick with what they’re doing. Past data tells them where they think they’re going in the short term based on extrapolation, provided some extreme and unforeseen event doesn’t happen. This is all very like the way experts at the Treasury behave.

Contrast that with actual entrepreneurs, like Richard Branson, for example. They look at new ventures in terms of their impact on the market but also consider the risks and how to minimise rather than avoid them. (Actually it’s rather strange that Branson is so passionately in favour of the EU.)

The UK has had longer than most member countries to establish its position within the EU since its transplant from Commonwealth Preference to Common Market. It now has the lowest proportion of its trade into the EU, with the exception of tiny Malta. Meanwhile other EU countries’ trade into the UK has done really well. The Common Market/EEC and EU have never worked to our strengths. This demonstrates the failure of the economic models on which the Treasury, Bank of England and OECD based their gloomy pre-Referendum predictions (the Gravity Model) – geographic proximity is not key to export success if your strengths lie in services that can travel almost weightlessly at near the speed of light. Britain has a trade surplus with the rest of the world based on such services.