Labour’s official policy on Brexit is to honour the people’s choice in the 2016 Referendum by leaving the EU (as promised in its 2017 manifesto).

It would seek to remain in the Single Market with membership of A customs union. This would mean we would have all the economic benefits of remaining in the EU so nobody would notice the difference. We would have to honour the famous ‘four freedoms’, which the ECJ would ensure we did, and our tariffs and regulations would need to be identical, but we wouldn’t be in THE Customs Union obviously because otherwise everything would be identical and we wouldn’t have left at all.

So we will leave THE European Union and instead join A European union which would be very similar except we wouldn’t have to participate in the useless European Parliament or the hopeless European Commission and we’d have no judges in the lawless European Court of Justice [1], [2] (both posts explain how the ECJ interprets laws to further the aims of the Union and its Treaties rather than what they actually say, so nobody can be sure of a fair judgement on the facts of their case). We’ve always said we’d be happy with AN EU, just not THIS EU, but we hadn’t imagined anyone would propose a WORSE EU which is the SAME EU except with no UK representation.

Of course most Labour MPs are not total idiots so they don’t want this stupid arrangement, they want a second (‘People’s Choice’) vote to overturn the last one which was dominated by too many idiots in the electorate who, hopefully, would have learnt better by now. If voters haven’t caught on yet perhaps they should be given more chances until the dimwits finally get it (as, in different circumstances, the French, the Danes and the Irish had to). 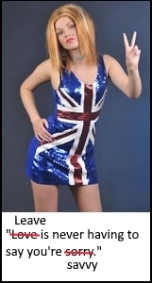 Labour’s London Mayor Sadiq Khan has a great idea on how to make the decision even more complex for common folk, he doesn’t want the Referendum run again but thinks the British public should have the chance to say whether they accept any deal the Government agrees:

“It’s really important that this is not a re-run of the referendum but the British public having a say for the first time on the outcome. … My point is this. Rather than having a bad deal or a no deal, let’s put that to the British public with the option of staying in the EU.”

Khan’s referendum would offer three choices: leave on the terms the Government negotiates (if any); leave with no deal (WTO trading terms); or remain in the EU. That should split the vote so no option gets an overall majority, and presumably Khan thinks the status quo should then be the outcome. But isn’t the status quo that we’re leaving? That might make him think again. Khan didn’t think of this all by himself, Vince Cable, Gina Miller and other steadfast Remainers got there first . If you’re going to ask the British people to make complicated decisions at least give them a proper challenge.

Opinions among UK voters don’t appear to have changed a lot since the 2016 Referendum but let us suppose there is another referendum and the result is a small majority for remaining in the EU, or very close to that. Would Remainers, like Lord Adonis and Dominic Grieve, then claim that democracy had run its course and we now had a definitive result? Probably they would say that the electorate had now had time to take all the factors into account and had undone their earlier mistake. (Actually the real ploy here is probably to create a three-way split with soft- and hard-leavers divided to ensure they don’t get over 50% of the vote so that outright remainers are the largest group.)

What then if we stay and the EU hits a crisis or changes itself in ways that damaged Britain’s interests or beliefs? That could be, for instance: a financial catastrophe that required our participation in a bailout; a migration solution that forced the UK to open its borders still wider; or further ‘progress’ towards closer union. Now the facts would have changed but would the voters be allowed to change their minds yet again? Probably not, at last the matter would have been settled for a generation with common sense restored. Who would want to risk all that uncertainty again?

Back to the UK Opposition, if that’s what it is with regard to Brexit. Kate Hoey, one of the few Labour rebels who actually really do want to leave the EU, says she has been campaigning alongside party leader Jeremy Corbyn and Shadow Chancellor John Macdonald for more than 40 years to quit the EEC/EU. They haven’t changed their minds about anything else over that time so she is certain they are dyed-in-the-wool* Brexiteers, if currently in sheep’s clothing (sorry, but you have to laugh at the absurdities). But they have had to bow to the majority of Labour MPs and organisers, if not to the majority of erstwhile Labour voters (most Labour constituencies voted to leave the EU). The result is fudge.

Here are some snatches from the Labour Party’s manifesto, with our comments (from here: https://labour.org.uk/manifesto/negotiating-brexit/ and here:

“Labour’s priority is to get the best Brexit deal for jobs and living standards, to underpin our plans to upgrade the economy and invest in every community and region.”

This is the sort of thing we would expect to find in a manifesto; high on rhetoric and low on practicality and particulars.

“But this government’s divisions, incompetence and deregulation obsession put that at risk.”

Naturally there is no mention of Labour’s own divisions and incompetence, though they do write of their plans to re-regulate.

“During the transition period, Labour would seek to remain in a customs union with the EU and within the single market. That means we would abide by the existing rules of both…”

They ignore the often-repeated fact that the EU will not modify its Customs Union to suit any third party country, the “integrity” of the CU being sacrosanct. They also avoid mentioning that abiding by the existing rules is a given but once out of the EU the UK would be unable to modify them or even to participate in discussions about modifying or introducing regulations.

“Labour rejects the Conservative policy of a race-to-the-bottom on standards and rights. We will treat EU protections as a floor not a ceiling.”

The Conservatives do not have a “policy of a race-to-the-bottom”; certainly not while it’s led by Mrs May, who is no advocate of small government. More likely this means that its Trade Union backers expect a Labour government to race to catch up with France’s highly regulated labour market, which President Macron is trying hard to de-regulate. to address his country’s high unemployment and low growth.

“Labour wants a close future relationship with the EU based on our values of internationalism, solidarity and equality – maintaining and extending rights, standards and protections.”

There we have it. Whilst Germany introduced the Hartz reforms to make its economy more flexible [3] and became prosperous again after the doldrums of the 1990s – France, Italy and Greece have endured low, slow or negative growth with many young people excluded from employment.

“Labour respects the result of the referendum, and Britain is leaving the EU. But we will not support any Tory deal that would do lasting damage to jobs, rights and living standards.” 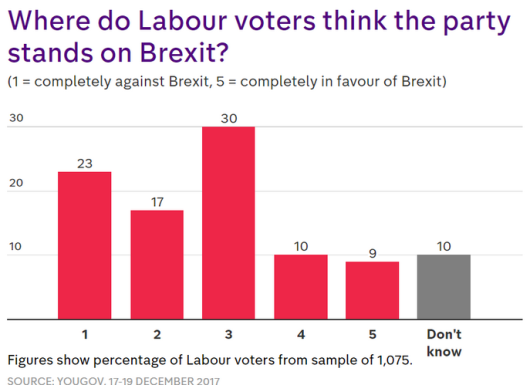 As we can see, Labour could do a lot more damage.

Labour’s leader, Shadow Chancellor, Shadow Foreign Secretary, Deputy Leader and London Mayor all have differing views (as far as we can interpret them). To paraphrase President Lincoln, some of its leaders “respect the result of the referendum” some of the time but they can’t fool all of the people all of the time. (See https://www.channel4.com/news/factcheck/what-is-labour-policy-on-brexit).

“Labour would seek to negotiate a new comprehensive UK-EU customs union to ensure that there are no tariffs with Europe, and help avoid any need for a hard border in Northern Ireland. Such an arrangement would need to ensure the UK would have an appropriate say on any new trade deal terms.”

Surely the simplest new CU would be the existing CU. There is no hint of what inconveniences the ‘new’ one would avoid nor why the EU would consider even piffling changes to its protective trade wall. Meanwhile, having honoured the Referendum result by leaving the EU’s decision-making institutions labour would still want its say. Wishful thinking.

Labour’s Leader, Sir Keir Starmer has six tests for the Brexit deal, which are:

There is no obvious way to ensure the exact same benefits except with the exact same arrangements and there is no point in having those while giving up all say in them. Why bother leaving? (Find his contribution here:

[2]       What this country needs is a benign dictatorship