The draft Withdrawal Agreement was rejected by the UK House of Commons. We offer some of our own reasons why this was the right thing to do, with quotations from the draft.

The WA is as dead as a dodo, slain by a massive defeat in the Commons. It is no more, it has gone to meet its makers in Brussels and Westminster. But it will not rest in peace. The body will be dismembered and its parts offered again, to be forced down the throats of British citizens. On its face is a horrid disfigurement, the backstop, which if removed might revive the corpse, but in its bowels there are poisons. An especially deadly one is the Joint Committee, which we examine here.

The WA tells us much about the EU project, about May’s supine Government and about the threat to seriously weaken the UK’s democratic system. In this and related posts we hope to show which parts of the WA’s dead body are most poisonous, so that we will recognise them when they are served up again (you can see our full argument and analysis in Draft Withdrawal Agreement: a Fatal Flaw).

We are struck particularly by the section in the rejected WA on the Joint Committee. If leaving the EU means regaining sovereignty then this section of the WA emphatically means we won’t be leaving.

This WA proposes neither a proper withdrawal from the EU nor a satisfactory legal basis for a transition to an unspecified future relationship between the UK and the EU. A major problem is the impositions this WA makes on any such future relationship; it indicates clearly the EU’s intentions.

The European Union is primarily a political project. Union law and its guardian, the CJEU, are the means by which a federal government continues to be stealthily imposed on the citizens of Europe and their democratically elected governments. The acceptance of this WA by the UK Government indicates its passivity in the negotiations and, perhaps, its connivance with the intentions of the EU.

The EU Project should be wound down before it collapses under the weight of its own contradictions and deceits. Meanwhile the UK should remove itself completely from under its thumb.

Here are some extracts from the WA and a few comments.

As we see next, the Joint Committee (which will no doubt become known as JC) will be able to impose laws on the UK and override decisions of the UK Parliament. And, in the nature of committees the two ‘representatives’ who co-chair the Committee will have enormous power.

This Article has severe implications for the sovereignty and independence of the UK during and after the withdrawal and transition period.

Article 166 states clearly that decisions of the Joint Committee will override any non-compliant decisions of the UK Government. Has the UK Government notified its citizens and voters that their elected governments can be overruled in this way? We feel sure that no one in his or her right mind, or at least with the successful future of an independent United Kingdom in mind, would sign up to such an arrangement. So why, and how, has our PM persuaded Parliament to consider it?

The Joint Committee would override Parliament. UK voters would not be electing a supreme representative legislature, which has been at the heart of our democracy for centuries and a model for many of the world’s truest democracies. We will be trapped in a faux-democracy as preferred by EU theorists, a mere imitation, with top-down control and no eject lever.

If this supine response to the bullying tactics of the EU is what we can expect in the next round of decision-making then we should consider whether our government truly wishes to represent the views of its people.

Next is a sample of how the Joint Committee will run the UK if this sort of clause is found in any future draft.

2. Under no circumstances may the United Kingdom:

(a) apply to its customs territory a customs tariff which is lower than the Common Customs Tariff for any good or import from any third country;

3. The United Kingdom may not, without prior agreement in the Joint Committee, apply or grant in its customs territory any quotas, tariff-rate quotas or duty suspensions.

And lots more of “The United Kingdom shall…” and “…may not…” . By now we are used to this but we should not accept it just because it is familiar.

Things get worse. We can expect that disputes will arise within the Joint Committee. The EU’s legislators have thought of this and included an arbitration procedure to deal with disputes.

The UK Government has agreed that the UK has no recourse outside the Withdrawal Agreement, so the usual legal recourse – to British courts – is explicitly excluded. The WA is designed to restrict the rights and abilities of an ‘independent’ United Kingdom; in other words, to prevent it being truly independent.

So although an arbitration panel can rule on decisions to be made by the Joint Committee, it is in its turn restricted in the areas it can rule on.

Article 174 applies to Union law as it stands at that time, so the UK will be bound by decisions of the EU’s court on laws it had no say in introducing. This could, and surely would, be used to counter any advantage the UK might threaten to build in any area of interest to the Union or to undermine any advantage it already has. The City should fear for its survival under these conditions.

The arbitration panel ruling shall be binding on the Union and the United Kingdom.

It is likely that any dispute submitted by the UK will fall outside the remit of the JC, particularly as the interpretation of Union law is the remit of the CJEU. In other words, in the most likely cases of disputes within the Joint Committee, arbitration will be handed to the CJEU for a decision, which will bind the UK. And where the matter isn’t handed over, the arbitration panel’s decision will bind the UK. The most contentious decisions for the UK are likely to be those concerning EU law, particularly as they are often inimical to UK interests, and to the manner in which law is made and determined in the UK (see The World’s Favourite Law). 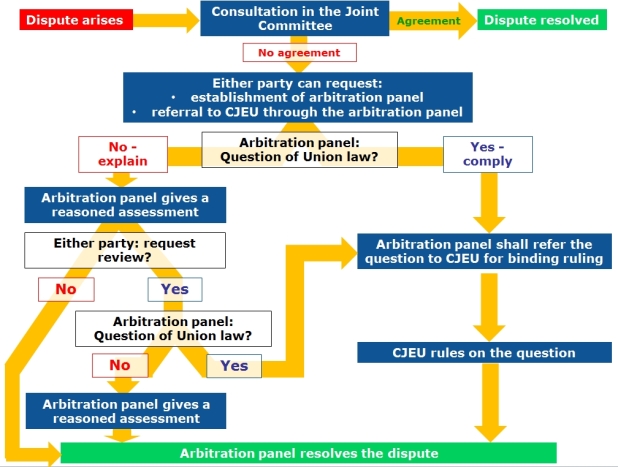 If in doubt, any dispute can (and therefore will) be sent to the CJEU. Thus in the end, as we have said before (see, for example, Unnatural Justice), under any such agreement, withdrawal, transition or beyond, the UK will remain under the jurisdiction of the EU.

The JC appears to offer benign cooperation but it dramatically undermines UK democracy by giving unelected officials authority over the elected Parliament and Government at Westminster. If the JC survives or is recycled in a new agreement imagine who might be its appointed co-chairmen – Olly Robbins and Martin Selmayr are obvious candidates, both proven to be intent on imposing autocracy.

For our view of the UK government and its wobbling supporters see Resign, You Cowards!