How Italy could issue its own local currency to avoid EU-imposed austerity in return for ECB loans.

If it looks like money and behaves like money then it is money. The picture here shows a mocked-up, Italian mini-BOT (Buono Ordinario del Tesoro), the proposed parallel currency that the Italian government is threatening to introduce to create the liquidity (spending power) that it needs to stimulate its economy. We’ve discussed mini-BOTS before (Italy Missing the Target). BOT is an Italian acronym for what would be called a gilt in the UK, a government bond; ‘mini-‘ just means the value can be a lot smaller than is normal for government loan-notes (typically £1,000 minimum) and more like a banknote, say £10; it can be used to pay for things and it doesn’t yield any interest or have an expiry date, unlike a normal gilt but just like money. It may not “promise to pay the bearer on demand the sum of” £10 (whatever that means in a post Gold Standard era) but the government can pay its suppliers with these loan notes and they in turn can use them to pay the government what they owe in taxes. A mini-BOT is essentially a chit, an IOU, but it can be passed on to another person; so this ‘money’ would circulate outside of the ECB’s control.

Mein Got! Zut Alors! What heresy! As ECB President, Mario Draghi declared, “Mini-BOTs are either money and then they are illegal, or they are debt and then the stock of debt goes up. I don’t think there is a third possibility.” The Mini-BOT threatens to kill the euro, if Italy can do it so may others, it is a step towards monetary independence. It can’t be used to buy German cars, it’s not a tradable currency so is only usable within the issuing state, but the Italians could forsake euros for dollars like many other countries with untrusted currencies do when they trade internationally, or they could re-introduce the lira and begin the end of the eurozone.

The main problem for the Eurosceptic governing parties of Italy is that the Italian people don’t quite trust their own rulers to run things properly and prefer to stick with the euros they have, which they know still buy anything they want. That is provided they have enough euros to buy what they need, and that is becoming harder with debt increasing despite a government surplus before paying the interest on its ever-growing loans. Unless the economy does grow significantly there is no way out except default and quitting the stranglehold of the euro; the economy has scarcely grown since the awful eucurrency replaced the old lira.

Mini-BOTs would permit the Italian government to spend more and/or tax less whereas eurozone rules require it to spend less and/or tax more; with a country facing prolonged recession the latter option is contrary to most economists’ recommendations but does correspond to the Bundesbank’s recipe for probity.

While Britons worry about Brexit the EU has plenty of additional worries. It probably dare not fine the Italians if they exceed its spending constraints for fear of bringing the house (of cards) down. But Junker, Tusk and the rest have gone on raising their salaries throughout the crisis when citizens’ wages were stuck and are about to receive golden goodbyes as they leave their mess to the next lot who will take over the Commission and Council. They might just make it into golden retirement before the reckoning comes.

There is a possibility that their successors will be more flexible towards Britain, Italy and wherever else needs a new approach [1]. As usual the French and Germans will tussle for the main jobs so that if one gets the Commission presidency the other hopes to get the presidency of the central bank (the ECB) – rather like the twin control of Prime Minister and Chancellor in the UK (Blair/Brown, May/Hammond). What often happens instead is that some non-threatening, non-entity gets the top job (Barroso, Junker), especially when, as now, they disagree on things like Brexit and financial union (debt sharing). 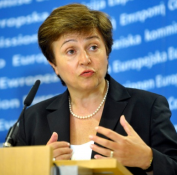 So Michel Barnier and Manfred Weber may miss out and anyway perhaps it’s time for a woman to take charge – Christine Lagarde, head of the IMF perhaps? Ah, but she’s French so how about the Chief Executive of the World Bank, Kristalina Georgieva, a Bulgarian? The East Europeans would vote for that. Georgieva resigned as one of the seven vice-presidents of the Commission, unhappy with the way Junker appointed Barnier and the ‘poisonous’ Martin Selmayr [2]. She has said there will be a Brexit deal when both sides “come to their senses” [3]. It’s a pity that Junker doesn’t step down until 31st October 2019, the same day Boris, if he becomes Prime Minister, says the UK will definitely leave the EU. Perhaps common sense will prevail thereafter. We won’t hold our breaths.