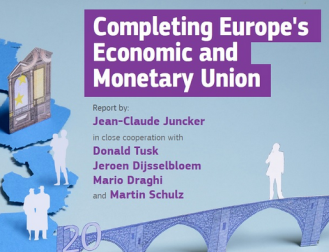 In June 2015 the presidents of the five major divisions of the European Union, led by Jean-Claude Juncker, President of the European Commission, published their report, titled Completing Europe’s Economic and Monetary Union. We reviewed the report in three posts, the second of which covered economic and monetary union. The presidents proposed four strands to completing economic and monetary union (EMU): economic, financial, fiscal and political unions. The report, though now four years old, has not been repudiated and we find evidence that these four strands remain the key objective for the EU, combining to bring about ever closer union.

We took a lighted-hearted view of the EU’s agenda, comparing it to that of the White Queen, who required her people to believe that there will be jam tomorrow. After a quick look at some economic history, we likened the EU’s approach to Einstein’s comment that doing the same thing over and over again and expecting different results may be the definition of insanity.

John Lanchester, in an October 2016 edition of The New Yorker, gave an excellent review of the euro and its failings. Among other things he covered some history of the EU, the euro, the global crisis, and how these link to give the EU a risky future.

In 1992, the European Union adopted the single currency but did not set up other institutions that would be needed to make it work, such as a federal ministry of finance (that remains an ambition for completing EMU). The euro was an economic experiment, unprecedented in scale, founded in ideology rather than experience, imposed on economies and cultures that were not able to cope with either the rigours of this monetary union or the ‘solution’ to the problems that it brought about.

The euro is seen by its keenest defenders as the crucial means by which integration is to be achieved and the member states brought under the wing of a federal government. It aims to apply a uniform solution to a diversity of economies and cultures. To participate fully all EU Member States must become eurozone (EZ) states. The EU and EMU are to become the same thing.

The euro was a giant step towards political union, as well as EMU, a dangerous step. After the financial crisis of 2007-9 economic growth was minimal, unemployment soared to extreme levels in weaker regions and even in Germany wages scarcely rose. This EMU also doesn’t fly.

The eurozone is now far less able to withstand another global financial shock with few financial magic tricks left to it. The crisis drove the EU to make changes but the result was that still more power was given to unelected bodies. The harm is experienced by the people, who get a sense of the remoteness of their ‘leaders’, who cannot be confronted and ejected, or obliged to change their painful policies.

In 2016, discussing his book The End of Alchemy: Money, Banking, and the Future of the Global Economy, Lord (Mervyn) King, previously Governor of the Bank of England, argued that the financial crisis afflicting Europe since 2009 was the result of a deliberate act of policy. He described what had happened over the previous seven years as an “appalling” example of the EU’s economic policy failure. He predicted that the struggling currency zone would need to be dismantled to free its weakest members from unremitting austerity and record levels of unemployment.

Lord King criticised the Five Presidents report, which argued for a fiscal union in which decisions would be made collectively and implicitly supported the idea of a single finance minister for the EZ. He regarded the approach of creeping transfer of sovereignty to an unelected centre as deeply flawed and likely to meet popular resistance. 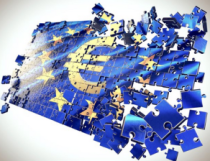 Completion of Economic and Monetary Union is central to the continuing development of the EU. A White Paper from the European Commission put forward five possible scenarios for the development of the EU towards 2025 (see Our Commentary on the White Paper and More on the White Paper). One of the scenarios was that the Union would progress at different speeds; the multi-speed scenario. The goal of a multi-speed EU would be to allow and enable (or oblige) member states of the eurozone to move more quickly towards completing EMU.

A survey by Eurobarometer, gave some clues to the likely success of a two-speed European Union. The views surveyed were of EU citizens, who would have no direct say in whatever decisions are taken. As in so many areas of the EU, the need to make joining the single currency a legal obligation results from the underlying federalist ideology. EU leaders can’t rely on their powers of argument or persuasion and they certainly can’t rely on the enthusiasm of their citizens, so economic and monetary union has to be enforced by law.

It isn’t politicians who make a vibrant economy but they can certainly inhibit one. Failing to leave the EU, because UK politicians believe that any deal is better than no deal, would be a disgrace to democracy but worse than that, Parliament will have shown that Britain cannot and will not resist the EU on anything it is determined on: full political union, monetary union, banking union, tax harmonisation, military union, free migration, and so on.

We would also be chained to a failing mega-’state’ whose leaders refuse to acknowledge this failing – it is the worst-performing trading group in the world with the lowest growth and shrinking trade share. The European Commission’s forecasts assume that trading relationships will remain the same (we think they mean that Brexit will be cancelled, in effect, which is what its ‘negotiators’ are aiming at). 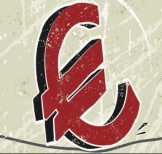 The expected benefits of the single currency were that it would eliminate wasteful conversions, promote economic convergence and stimulate growth. In practice the economies in the eurozone have diverged and growth hasn’t been enhanced – when theory and practice are so different it must be the theory that’s false.

A single currency was seen from the very beginning as a key signifier of a single nation. It would help mould us into a common mindset, to identify as Europeans. It would promote convergence towards a single economy, bringing equality and prosperity to all its constituent communities. Many people saw the risks of attempting to unify such diverse economies under the discipline of monetary union.

We looked at a few other examples of monetary union and how these fared; not well in practice. We also reviewed the economic circumstances of several member states and regions.

It is clear that giving control of monetary policy to a ‘higher’ authority is a risky step for any nation, because it surrenders vital powers which might be used by that authority for interests that are not those of the nation that surrenders its right to make monetary policy.

Monetary union failures go hand in hand with political disintegration. The same may happen to the EU. Ultimately monetary unions fail because of politics. Money in the eurozone is unevenly distributed and such measures as are usually available to a central bank have already been used up.

Monetary union is the most daring and dangerous step the EU has yet attempted, to accomplish its mission of creating an integrated, federal Europe. On the eve of its launch it received a dire warning when the similarly-constructed Soviet Rouble Zone collapsed but crises are what the Union relies on to force refuseniks to consent and the project went ahead despite the warnings.

The similarities between the Eurozone (EZ) and the Rouble Zone suggest that their fates may be similar too. Successful monetary unions require a ‘lender of last resort’, so far denied to members of the EZ. It has been a further drag on EU growth, including its leading economies, which even Britain has outperformed since the euro began.

The logic of EMU for the EU is to drive, and even to force, ever closer union. But there must be political will and popular support; the latter is unlikely to exist while an end to austerity is not in sight. 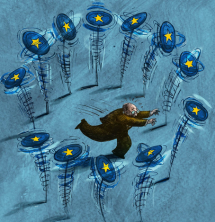 We concluded our four-part series on the euro with a look at some economic theory. The essence of the problem is that no country can have a fixed exchange rate, free flow of capital and its own monetary policy; one of them has to adapt to economic stress.

Money in the Target2 system is meant to ebb and flow but balance out in the end (see Die Another Day?). It is so out of balance now that it can never recover except by massive default. If the EZ breaks down, countries will adopt their own currencies, with some depreciating heavily. Debts governed by local law will be re-denominated, with some big losses ensuing.

We concluded that politicians have been foolish, gambling that unity will prevail and so advance their project. When the crisis comes it will happen quickly and Britain will be better off out.

The next post had sections on funny money, bus money and dinner money. There’s plenty of funny money in Germany but it won’t be so funny when taxpayers and savers find out just how much of it is in worthless Target2 ‘accounting units’ that will never be settled. Bus money referred to the Leave campaign’s red bus, which was plastered with the figure of £350 million per week which, it was argued, could be saved if the UK left the EU. Many of those objecting to Britain leaving the EU without a deal are trying to frighten us with the prospect of higher food prices because of tariffs and shortages of EU produce (see Bacon, Lettuce and Tomatoes). We concluded that Britain will adapt but that we must not let the EU or Remainers trick us with their fear-mongering.

ECB action to stabilise the EZ may help stop contagion spreading from the weakest economies to the strongest. Targeted longer-term refinancing operations (TLTRO), a tool in the European Central Bank’s (ECB) ‘non-standard monetary policy’ kit bag, were triggered for the third time. Under this scheme money is lent to a bank on generous terms but with the requirement that the funds are lent to firms for investment in the productive economy.

TLTRO-III is related to what economists call ‘helicopter money’ whereby a central bank prints money and gives it to citizens to spend and stimulate a flagging economy. The EZ is facing a triple whammy of shaky sovereigns, migrating capital from weak to strong and a massive quantity of IOUs that cannot be cleared at face value without strong growth. This is the danger of the ‘one size fits all’ nature of monetary union across such a diversity of economies; problems spread more quickly than effective solutions.

Every so often we try to find good arguments from Remainers to test our Leave arguments against. Invariably we are disappointed; our opponent’s arguments are weak and too easy to refute, often muddled and sometimes self-contradictory. In the most recent post on this theme we reviewed some of the best-presented arguments in favour of EMU and the euro, and found them wanting. Remainer arguments appear to be based on wishful thinking, that the EU has survived many crises, therefore it will continue to survive. We cannot think of an empire that survived when it ignored the deeply ingrained experiences of history.