Central to the continuing development of the EU is the completion of Economic and Monetary Union (EMU), described in some detail in the Five Presidents Report from June 2015. As we understand it, the goal of a multi-speed EU would be to allow and enable (or oblige) the member states of the eurozone to move more quickly towards completing EMU while, in due course, the remaining member states would join (i.e. would adopt the euro) when they were ready. There may be other ‘convergences’ that the core group could do faster but for this post we focus on EMU.

We need another assumption here: that the core group – the eurozone countries plus any that initially volunteer – will move together at a faster pace and each of the remainder will move at its own, lower, speed. For this purpose, we can regard the scenario as two-speed: core plus remainder. However, for other discussions (see the final paragraphs below) variable speed among the remainder may result in more disruption than EU leaders anticipate.

In this post we look at some of the issues underlying the interest in a multi-speed Union, notably the question of whether non-members of the eurozone would be likely to join.

Eurobarometer carried out a survey last year, the results of which may give some clues to the likely success of a two-speed European Union. We note that the views surveyed are of EU citizens, who will have no direct say in whatever decisions are taken.

The title of the survey is, “Flash Eurobarometer 440: Introduction of the euro in the Member States that have not yet adopted the common currency”

“For this survey carried out in April 2016, some 7 000 respondents in the seven EU Member States that have yet to join the euro (Bulgaria, Czech Republic, Hungary, Poland, Romania, Croatia, Sweden) were interviewed by phone. Citizens from different social and demographic groups replied to a set of questions focusing on issues ranging from their perception of and support for the introduction of the euro in their country, to how well citizens felt informed about t 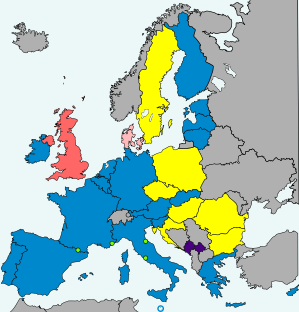 he common currency. Questions included how citizens saw the consequences for themselves, their country, and for those countries which already have adopted the euro. … While 52% of respondents think that the introduction of the euro has had positive consequences in the countries that are already using the euro, the proportion of respondents who are in favour of introducing the euro in their country varies widely, from 64% in Romania to 29% in the Czech Republic.”

The data from the survey are presented in multiple spreadsheets. We pick out some of the questions that particularly interest us and show the average and range of the responses.

Q4b In your opinion, is (OUR COUNTRY) ready to introduce the euro?

Q9 What impact do you think the introduction of the euro has had in the countries that are already using the euro?

Q10.1 Do you think the introduction of the euro would have positive or negative consequences for…[your country]?

Q11 Generally speaking, are you personally more in favour or against the idea of introducing the euro in (OUR COUNTRY)?

Q12 When would you like the euro to become your currency?

“Adopting the euro will mean that (OUR COUNTRY) will lose control over its economic policy.”

From the results we can see that Romanians are fairly keen for their country to adopt the euro while citizens of the Czech Republic and Sweden are unenthusiastic. If the decision of whether to adopt the euro were to be based on the views of citizens then the case is not strong. Of course, it won’t be, as under EU law the seven

countries are obliged to adopt the single currency in due course, unless they are allowed to opt out (as Denmark and the UK have done which, we assume, is why they are not represented in this survey).

As in so many areas of the EU, the need to make joining the single currency a legal obligation (unless there is a hard-to-win legal opt-out) results from the underlying federalist ideology. EU leaders can’t rely on their powers of argument or persuasion and they certainly can’t rely on the enthusiasm of their citizens, so economic and monetary union has to be enforced by law.

If the multi-speed scenario from the White Paper is adopted – it is currently favourite among older, northern and western member states – then the most likely prospect will be for a core group moving more quickly towards completing economic and monetary union, and the political union that is supposed to underpin this, while the others are either taken one-by-one into the core by their governments or apply to opt-out.

ares to ask the opinion of the people” (see Romancing in Rome).

A multi-speed strategy will leave the 27-state Union in a precarious position.