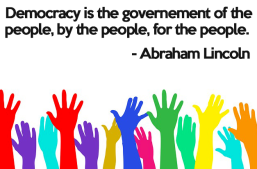 Over the three years we’ve been writing this blog democracy has been close to the centre of our attention. The issue of democracy highlights, perhaps more than any other theme, the gap between the values that the EU declares it holds and the absence of such values in practice. It also shows up at its worst how the EU contrives to cover the gap with dishonest words, repeating without shame that the Union is a democracy while demonstrating, also without shame, that it is not.

Our first post in the series summed it up tersely:

“In democratic systems disappointing leaders are replaced, often with their opposites. Errors are thereby corrected, typically over-corrected, and so the system zigzags forward, never attaining perfection because the process is too coarse and anyway the goalposts move as the world changes.

By contrast, without elections but with an ideology frozen in a bygone age the system slides towards its extinction through its failures, irrelevance, desertions or even explosive destruction.” 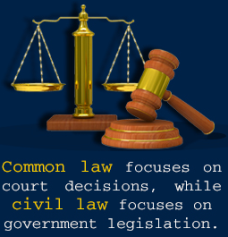 We quoted Lord Sumption, a judge of the UK Supreme Court, who gave a speech in 2013 that beautifully explains the benefit of parliamentary law over expert, judge-made law, which is one of the most important ways in which the UK is Different from most EU countries. He argued that Common Law (the UK variety) is necessary for democracy and without it (and with Continental Europe’s Civil Law tradition) democracy decays and dies.

Central to this claim is that laws based on precedent can be changed through popular agreement, which then means that they become popularly accepted, unlike EU law, which is handed down from on high and is aimed mainly to benefit those who design it.

Our title for this post may be tongue-in-cheek but it has serious undertones in the context of a project that is designed to bring rule without democratic restraint; in effect this is what the EU mandarins are suggesting, that the UK, like the EU needs a firm, stable government which cannot be overturned at a silly whim. 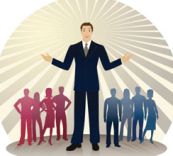 The EU, stung by criticism of its “democratic deficit”, tried to improve control over its unelected Commission. It hasn’t succeeded.

We cite an academic paper that looks at reforms that have been made, including the introduction of veto powers to the European Parliament. Although the power seems significant, it has only rarely been used, which means that in practice the Parliament does not limit the power of the Commission to rule unchecked.

We interpreted such reform as a fancy-dress exercise designed to counter objections to the EU’s undemocratic procedures without disrupting them in practice.

Six months after the Referendum we reviewed a paper by the Electoral Reform Society (ERS), which proposed ways in which the EU could reform its procedures to overcome the democratic deficit that they (the ERS) and we had identified. But we asked whether the exercise of reform is ultimately futile if the organisation cannot be changed, short of a catastrophic collapse. 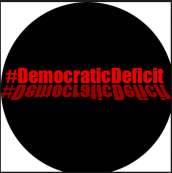 Being concerned with electoral reform, the ERS had to believe that the EU could be reformed. We argued, in contrast, that the underlying ideology of federalism requires the centralists to avoid significant reform, notably in respect of democracy.

In its paper the ERS set out the criteria on which they made their judgement of EU ‘democracy’. They specified four principles against which claims of democracy should be judged: subsidiarity, representativeness, accountability and engagement. The EU has claimed on many occasions that it conforms to these principles and is therefore democratic (see Aspirations and Outcomes where we provide evidence that EU leaders make such claims and more evidence showing that the EU does not conform to these principles).

We concluded our detailed review of the ERS’s reform recommendations by arguing that it is clear that much of what the ERS proposes would conflict with the federalist agenda, which is why we continue to argue that effective democratic reforms cannot be expected from the EU.

The EU’s lexicon offers a definition of ‘democratic deficit’ and proceeds to deny that such a thing exists. This part of the definition coincides with our view, “EU voters do not feel that they have an effective way to reject a ‘government’, they do not like, and to change, in some ways, the course of politics and policy.” Except that it’s not about what voters feel but about the fact that there is no such way. Because their definition softens the reality the EU has little problem in ignoring the deficit.

The so-called rebuttal also claims dishonestly that the European Parliament “has evolved from a consultative assembly to a co-legislator.” By repeating such claims often the EU has managed to convince many uncritical commentators and voters that they mean what they say. The EU is not willing to give serious consideration to the view that it is not a democratic form of governance. Its Foundations required the EU to be undemocratic.

One of the many self-justifying claims that EU leaders and other supporters make is that the European Parliament (EP) demonstrates that the EU is democratic. Our next post focused on one way in which the Parliament demonstrates the weakness of this claim. The Parliament appears to exist as an attempt to cover the absence of any real democracy in the EU. In its activities it absorbs and neutralises the inconsequential ramblings of a disdained citizenry.

In response to the UK notifying the EU that it intended to cancel its membership, the EP put out a suggested set of guidelines for EU negotiators, which faithfully echoed the official guidelines that had already been prepared by the European Council and confirmed by the Commission. In this way the Parliament displayed its irrelevance to even such a momentous event as Brexit. Its purpose in practice was to hide the fact that there was to be no participation by citizens in Brexit (the Referendum having shown how unreliable voters could be).

Several EU documents that provide evidence of our conclusion that the EU is not a democratic project. Our more detailed paper, Sources of Evidence, can be downloaded. 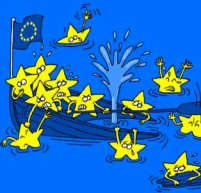 The implausibility of this is what the EU wants to hide; they want us citizens to believe that the EU is truly democratic and that the Union can deliver prosperity while in fact they have done away with democracy (and prosperity is unevenly delivered at best). We concluded that ‘democracy’ as used in the EU seems to amount to talking among themselves. Citizens need not reply.

We are not just citizens of the EU, we are subjects of a regime that we cannot change, either alone or in the company of a majority of our fellow citizens. The ambition of the EU is to form a federal government for Europe; it is well on its way to achieving this ambition. The governments of 28 previously independent European nations have, by signing up as member states of the EU, increasingly given up their sovereignty to a federal government.

Appointed EU politicians are not accountable for their failures, they can (and do) carry on pursuing their agendas and declaring, against the evidence, that they are successful. In proper democracies citizens throw out those they believe have failed them and they suffer the consequences if they choose the next one badly. Under the EU’s version of democracy they are not allowed to make bad choices, or any choices; the right choices have been made for them.

In Europe national parliaments frequently challenge their governments, and when they can’t such governments are regarded as undemocratic. In a true democracy the people’s chosen representatives would have decisive influence. The messy process through which the UK Parliament rejected the approved Withdrawal Agreement illustrated both the power of democracy and why the EU doesn’t want anything to do with it, though they feel it is necessary to pretend otherwise. 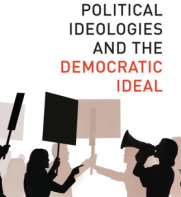 There is no example of absolute democracy; the term denotes some sort of ideal from which real nations fall short, and the EU falls shorter still.

Democracy is not about consulting citizens but being accountable to them in a way that allows voters to remove a government, and indeed a Parliament, that they believe – in sufficient numbers – has let them down. Those are two key characteristics of any governmental system that deserves the accreditation ‘democratic’. While we have no objections to consulting citizens such things as Citizens’ Panels are not sufficient to justify the use of the term ‘democracy’ to describe the European Union. Without real, untrammelled accountability there is no such thing. Above all, how citizens can get rid of rulers is the key determinant.

We have examined closely the notion that the EU is a democracy. EU treaties and other documents are linked from a downloadable document, EU on Democracy. 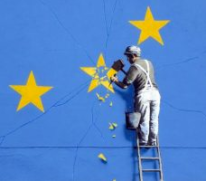 The EU not only claims that it is democratic but makes it a condition of nations that wish to join as members that they are democracies. It is now struggling with some member states (notably but not exclusively Poland and Hungary) that transgress features of democracy, as the EU sees it. Part of this struggle may result from the EU’s own democratic deficit.

In their minds government is supposed to be imposed from the top, where the vision and motivation exists, because at ground level representatives are too busy running around trying to satisfy the immediate concerns of people who might otherwise kick them out. We can vote for members of the European Parliament but to what purpose, since we cannot vote to remove an EU government we don’t like? 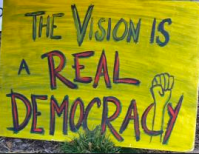 “We decide on something, leave it lying around, and wait and see what happens. If no one kicks up a fuss, because most people don’t understand what has been decided, we continue step by step until there is no turning back.” (from Jean-Claude Juncker, President of the European Commission).

This is an unusually frank acknowledgement of the EU’s true disregard for democracy. An ideal government is representative in two senses. First, the citizens delegate the day-to-day operations of the state to their representatives, who then form a government. Second, at regular intervals the citizens can dismiss their government if it displeases them, and elect an alternative set of representatives to govern on their behalf.

The EU has decided against democracy, mainly because of its continuing fixation on its progress towards ruling its member states as a supra-national government.

We have shown consistently throughout our blog that the EU’s ideology, growing as it does out of disdain for democracy and coupled with a culture of deceit, is bound to lead to discontent and disenchantment with the source of the discontent – the EU itself.