Steve Bray, the annoying anti-Brexit campaigner, spent nearly four years braying through his loud hailer in Parliament Square and thrusting his posters in front of the news cameras. This picture is one example and it’s now a very good question (we added the Mad Hatter price ticket, sorry).

Covid-19 (C-19) has changed the economic outlook for the UK so much that further disruption caused by leaving the EU might seem unwise. Should Brexit be put on hold until the crisis is under control, or delayed to allow time to negotiate a smooth and acceptable deal? We don’t know how long either will take, nor the costs of leaving or staying; the story of the virus shows how difficult it is to make good forecasts when the data are incomplete or unreliable.

So is Brexit still worth it in the face of so much uncertainty?

It’s worth it – to have the freedom to help revive the economy, especially in regions likely to be most harmed by C-19. We would flourish just by rectifying our low productivity and the wasted potential of our regions outside the East and South East. These are not EU-induced issues but its rules would probably inhibit potential solutions under ‘level playing field’ strictures.

It’s worth it – to have the freedom to offer state aid without EU approval, especially to startups that promise to transform the economy in fields such as green technology or artificial intelligence and also in enabling a level of self-sufficiency where critical shortages have been exposed by the virus. Whilst many Brussels’ rules have been waived or ignored during the crisis they are likely to be re-introduced and enforced heavily against a ‘disloyal’ UK. We noted that Germany blocked internal SM trade in medical kit and quickly provided massive state aid; other, less well-off, member states couldn’t afford to do this. But Germany is über alles. 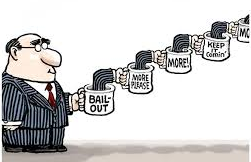 It’s worth it – to avoid having to contribute to bailouts caused by EMU, especially as we are unlikely to receive any assistance ourselves (project funding is being denied now despite our undiminished budget contributions). Theoretically the UK is liable for up to £200 billion of potential eurozone bailouts [1]. Although David Cameron negotiated a deal to provide a mechanism to repay non-eurozone countries if the Multiannual Financial Framework (EU budget) were used for EZ bailouts, that mechanism has not been established. The Daily Telegraph’s economics correspondent, Jeremy Warner, wrote last July, “For these liabilities to be triggered, however, requires such an extreme set of circumstances as to make it seem not just very unlikely, but virtually impossible.” [2] The current circumstances are extreme, Britain must be outside the next MMF.

It’s worth it – to stop paying more into the EU budget than we get back. Poland for example receives about 80% of the amount the UK contributes (both net figures), no wonder its government wants to stay and has stood behind the Commission’s harsh terms. The £39 billion ‘divorce bill’ agreed by Theresa May was to settle the UK’s commitments under the EU’s current budget; the next MMF period runs for seven years from 2021, let’s not get involved.

It’s worth it – to escape the biased European Court of Justice and re-establish the primacy of our common law [3]. Under the Withdrawal Agreement, and therefore its extension, our Supreme Court must uphold all ECJ rulings, including any arising from new laws on which the UK is not even consulted. The ECJ has a mandate to interpret the law to favour the mission of the Union, in particular ‘ever closer union’ – it’s not justice based on the merit of evidence alone, as it should be.

How interesting that the German constitutional court has asserted its own primacy over the EU law by its recent ruling on the illegality of the ECB’s sovereign bond purchase program for which the Bundesbank has made by far the biggest contribution. Christine Lagarde, the ECB’s president, insists that the institution still has €1trillion more up its sleeves (though that’s scarcely enough to save Italy alone). But Germany is torn, it stands to lose from the break up of the EZ or from its continuation; probably there will be a fudge to continue propping up the EZ in the hope that it gets through the latest crisis, but Germany will never get most of its money back [4].

It’s worth it – to end the uncertainty: so that businesses can begin to plan and invest; so that the US, Japan, Australia, South Korea and others who say they want to negotiate trade deals with the UK don’t stop.

It’s worth it – to be governed by people who are accountable to us and whom we can dismiss, every few years, if they don’t please us. For example, we can dismiss the government if we find out they have been lying to us; we can’t do that to the dishonest EU [5].