Why is free movement of people sacrosanct?

Is this about diluting nationalism to make centralised control easier?

Or is it sacrosanct simply because it has always been a central plank in the ideology. It is of course presented simplistically, so as not to confuse people with details. It would be possible to define the “free movement of people” in a way that would benefit receiving nations as well as the people who move, without an obligation to accept everyone who wants to move. There are already filters in operation; it would be better to refine these and make them explicit rather than pretend that this is some, heavenly-inspired, absolute that can bear no exceptions.

The British Government seems to be taking this freedom – of movement of people – as a challenge. Home Secretary Amber Rudd presented her suggestions for restricted movement of people to the Brexit Committee last week. These included: free access to students and tourists; restricted access to low-skilled labour (they’d need a job and work permit before coming); a seasonal-worker scheme to allow for shortages, especially in agriculture and construction.

It is notable that the free movement of Europeans is the only one of the four freedoms actually working as designed. Services are mostly not free to cross borders (the proposed Services Directive was scuppered by Germany and France in 2006 and anyway didn’t cover lots of professions) and neither is capital, except into Britain (the Takeover Directive was also sabotaged by Germany and France). Goods can move but obstacles are regularly introduced as a result of protectionist lobbying (kettles, vacuum cleaners, etc.)

See our separate posts on The Single Market and the Four Freedoms and Freedom of Movement.

EU leaders are behaving like playground bullies. It’s a dead-giveaway, obviously the integrity of the Project matters more to them than the welfare of their own people (let alone the despised Brits).

Donald Tusk, President of the European Council, is now saying that Britain should go for the hard Br

exit option, no doubt because that would make it easier to get support to block Britain’s exit strategy, whatever that turns out to be.

Britain’s only real alternative, he said, is “no Brexit”. In other words, there is no alternative. This seems like an attempt to manage the negotiations before they begin, which perhaps we should expect.

You might expect an idealistic and benevolent Union to part in a fair and friendly way with a country that wants to leave. Clearly the settlement should not provide benefits that aren’t earned or paid for as that would encourage others to become freeloaders but punishment should not be the goal. Has Hollande not asked himself why other parties might want to leave the EU?

Mrs Merkel meanwhile has told the likes of Bosch and BMW they won’t get tariff exemption after Brexit, but will either EU prop remain long enough to carry out their threats? Even the leaders of nations like Malta and Slovakia have thrown their tiny weights into the scrum. A union held together through fear is not fit for a free nation wanting to thrive. Jean-Claude Juncker has told German firms that they should not negotiate with Britain directly to retain current trade benefits.

These and other symptoms of the ‘clergy’ fighting back are more likely to increase opposition to the EU religion than to protect it. If the cracks in the foundations continue to multiply and widen then Brexit may become irrelevant as the EU disintegrates.

Why do the idealists ignore present failure? 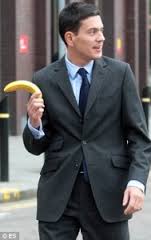 David Milliband, for example, sees things in elevated terms of international cooperation – why doesn’t he see how ineffective the EU is and why does he think it will change? Probably he’d say that if we stay we can persuade others to reform, but that has never looked likely. Their answer is that we haven’t tried hard enough, or as Frau Merkel says, we need “more Europe”. She and like-minded President Hollande may not be in their posts much longer but radical change is unlikely unless they are replaced by Frauke Petry (AfD) and Marine Le Pen (FN) with support from the likes of Gert Wilders (Dutch Freedom Party) and others of the far right. That would be like an EU run by Donald Trump on speed – we’d be better off out.

Ordinary people are capable of seeing beyond the ends of their noses but need to see improvements to their lives in the foreseeable future.