On its website the EU outlines, among other things, its current ten priorities for the future. Here is one of them:

The Commission’s work on completing the Economic and Monetary Union builds on the Five Presidents’ Report. Here’s how the Commission sees its main policy areas under this priority:

on that ensures each economy has the structural features to prosper within the Monetary Union.

Possibly only Germany would agree that it is prospering within the eurozone.

Completing the Banking Union (Financial Union) is key to guaranteeing the integrity of the euro, by limiting risks to financial stability and increasing risk-sharing with the private sector.

Weak banks in vulnerable economies are to be subsidised by strong banks in healthy economies. See It’s a Bonkers Union? below. 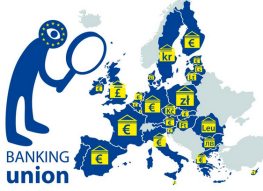 A Fiscal Union that delivers both fiscal sustainability and fiscal stabilisation. 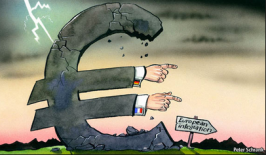 The Commission wants a common budget and tax regime across the EU, thus further disabling national economies. See So it’s a Fissile Union then? below.

A Political Union will provide the foundation for economic, financial and fiscal union through genuine democratic accountability, legitimacy and institutional strengthening.

This is the big one, meaning a supra-national government to ensure that each member state complies fully with all unions. Accountability and legitimacy are defined strangely in terms of meetings and laws and do not involve participation by EU citizens. 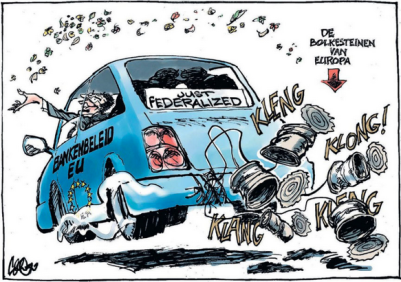 In 2012 Hans-Werner Sinn wrote a piece in anticipation of the European Commission’s proposal to complete the banking union. Hans-Werner Sinn is Professor of Economics and Public Finance at the University of Munich, President of the Ifo Institute for Economic Research and serves on the German economy ministry’s Advisory Council. Here are some of his views on the proposal, from his article for Project Syndicate:

“In blatant violation of the Maastricht Treaty, the European Commission has come forward with one bailout plan after another for Europe’s distressed economies. Now it wants to socialize not only government debt by introducing Eurobonds, but also banking debt by proclaiming a “banking union.”

“Socializing bank debt is both unjust and will result in a future misallocation of resources. Socialization of bank debt across borders implies that a country’s private borrowing costs are artificially reduced below market rates, as insurance (in the form of credit-default swaps) is provided free of charge by other countries. Thus, capital flows from the core to the periphery would continue to exceed the optimal amount, undermining growth for Europe as a whol

“History offers countless examples of the misallocation of resources that can result from socialization of bank debt. One is the 1980’s savings and loan crisis in the United States, which cost
US taxpayers more than $100 b
illion. Under the umbrella of common deposit insurance, US savings banks made a “gamble for resurrection” – borrowing excessively from their depositors and lending the money out to risky enterprises, knowing that potential profits could be paid out as dividends to shareholders while potential losses would be socialized.

“In other words, private profits were generated out of socially wasteful activities.”

So it’s a Fissile Union then?

“The ongoing European debt crisis has provided daily evidence that monetary union cannot work without fiscal union. The Eurozone is clearly unable to manage its macro-economic imbalances without some sort of federal structure to oversee revenue collection and expenditure. Combining supranational monetary policies with national fiscal policies is unsustainable. A fiscal union run by a fully empowered EU Finance Ministry under proper democratic oversight will give the Union strength and stability, mutualizing credit risk while imposing tough fiscal discipline.”

The ‘necessary’ EU Finance Ministry would have the power to overrule national ministries, with further loss of sovereignty and democratic oversight. We leave to your imagination what “under proper democratic oversight” might mean in the context of the EU; the website doesn’t tell us what they think it means, nor does the EU.

“Closer economic union is the only way to halt Europe’s decline in the new global environment. The current half-baked arrangements just won’t do.”

“Fiscal union would be a major step towards a true political union. It would have to be administered by real federal bodies. Central tax resources and mutualized debt would become powerful symbols of a united Europe. The need for strong democratic oversight will spur the creation of a revitalized European Parliament and directly elected Commission. That could evolve into the government of a United States of Europe able to stand up alongside the leading powers of the emerging multipolar world.”

There’s that incredible “democratic oversight” again.” Isn’t it brave of them to mention the USE? Note also “closer economic union”, “true political union”, “real federal bodies”, “mutualized debt”, which are examples of the agenda pursued by enthusiastic federalists.

“A European fiscal union, with proper

institutions would be able to provide joined-up management of the EU economy as a whole. Ex-ante control would mean that wayward Irish, Spaniards or Greeks would not be able to recklessly inflate property bubbles or cook their budget books.”

This, largely pre-EU, website gives a clear and honest description of the true agenda, a Northern invention, and its inbuilt disdain for Southern member states.

And the arguments against (as if the above weren’t enough):

“As long as the European Union is made up of independent nations with their own elected governments, their problems are going to be essentially local and they will need local solutions. Squeezing them into the same monetary straightjacket has clearly failed and adding a fiscal union would just exacerbate an already unsustainable situation.” [Fiscal Union-2]

“Fiscal union is another nail in the coffin of national independence. Setting budgets is a core responsibility of sovereign parliaments. Transferring that power to some distance [sic], opaque Brussels institution would be deeply undemocratic. History tells us citizens will not accept taxation without representation. An unpopular fiscal union would hand piles of ammunition to anti-European political demagogues, undermining the foundations of the Union.”

“The tax harmonization that will follow fiscal union will only move in one direction: up. We’ll all end up paying more. Countries like Ireland or Slovakia that b

oosted their economies with innovative revenue policies will be forced to apply job-destroying high taxes as part of a French-led crusade against “fiscal dumping.” Another blow to Europe’s competitiveness.”

“Fiscal union oozes moral hazard. Loose spenders will be given an everlasting bailout fed by virtuous nations, led by Germany. By necessity the fiscal union will become a transfer union that punishes budgetary righteousness. The safety net for sinners will lessen their incentive to tighten belts and push through reforms their economies need.”

It’s interesting that these arguments against a fiscal union have the flavour of protecting the EU from making a mistake, rather than emphasising its penchant for making them, which derives from its ideology. 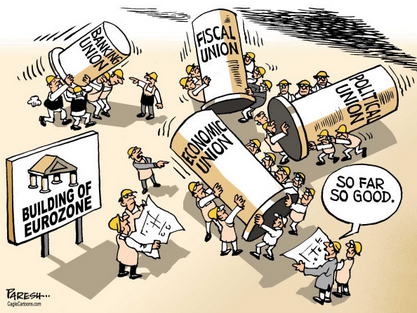