Donald Tusk, President of the European Council, has said, in response to a House of Commons statement by Theresa May, that both the EU and the UK may need to start planning for the negotiations to fail to reach an agreement – the ‘no deal’ outcome.

He said that there is no chance that the Council meeting scheduled for 19 October would agree that “sufficient progress” has been made in the first phase of the talks, which means that they will not be able to continue to the second phase, in which a future trade agreement is to be discussed.

Dr Richard North (eureferendum.com) agrees with Tusk on this point but not on another. As he addressed leaders in Brussels on 11 October, Tusk said, “We are negotiating in good faith, and we still hope that the so-called ‘sufficient progress’ will be possible by December.”

Dr. North comments that, “Michel Barnier has spent the last five months of negotiations repeating the EU’s offer and watching the U.K. government creep closer to it. But he hasn’t felt the need to shift his own position in any significant way.” 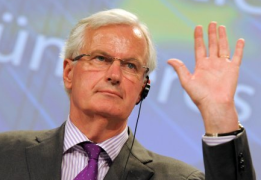 Barnier himself, responding to Mrs May’s comment that the, “ball was in the EU’s court” remarked that, “We are working. Brexit is not a game. Don’t forget it.” EU leaders say that the ball is in the UK’s court, by which they mean that they expect to see more, and faster, creeping towards their fortress.

We have already observed that both sides are playing games (see Barriers to Exit), each hoping that blame for failure will be attached to the other side. The fixed position of the EU cannot justly be described as “negotiating in good faith”. If the UK government is indeed creeping closer to the EU mandate then we must hope that they stop creeping at once. We interpret the UK government’s actions as offering a position that appears to be sufficiently flexible to be fairly called a negotiation while expecting – and planning for – the talks to fail.

We should remember that the EU Parliament has the final say on whether to agree any Brexit deal. Meanwhile the latest news from October’s round of negotiations is that Mr Davis believes there’s been progress on the Irish border and citizens’ rights while M. Barnier says there hasn’t been much progress at all. Unless the UK folds its cards and agrees a big payment there won’t be “sufficient” progress to proceed to Stage 2.

Obviously this was expected which is why the UK Government has announced that it is starting to prepare for No Deal and is setting aside a tiny sum (£250 million) for this. It should be a tidy sum of course but Spreadsheet Phil, the Chancellor, says he won’t spend nugatory amounts until the last possible moment in case there is a Good Deal. By adding this he effectively declared “no trumps” for Davis’s next play, increasing the chances of a Bad Deal.

This is taken from a recent paper, titled Customs Bill: legislating for the UK’s customs, VAT and excise regimes, presented to the UK Parliament earlier this month. The paper can be accessed here.

Another paper, titled Preparing for our future UK trade policy and also presented to Parliament this month, appears to seek to open negotiations with the EU on a future trade agreement. This paper can be accessed here. 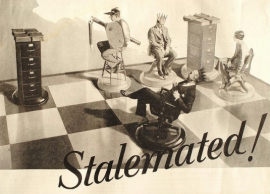 Discussions on this topic have been expressly deferred by the EU to a second phase of discussions and will not be entered into until the European Council agrees that sufficient progress has been made on the first phase topics. This arbitrary barrier, coupled with the likely failure of the first phase discussions to reach an agreement, which must be expected by the UK government, clearly indicates that the UK is playing its own blame game.

“In her speech in Florence, the Prime Minister set out a bold and ambitious vision for our future relationship with the EU once we have left, both in terms of the economic partnership we seek, and the security relationship.”

The EU has also stated that any proposal for a transition period, between the UK leaving the EU in March 2019 and the establishment of a new trading relationship, will not be discussed until phase two. So the next statement can be regarded as flying a kite:

“The [UK] Government has also proposed a strictly time-limited implementation period to be agreed between the UK and the EU to allow business and people time to adjust, and to allow new systems to be put in place. Such a period should ensure that the UK’s and the EU’s access to one another’s markets continues on current terms…”

The PM uses the expression ‘implementation period’ instead of ‘transition period’ and clearly means something different by this. Implementation implies that the end point, a trade agreement, has already been reached; ‘transition’ is more ambiguous and could include continuing discussions towards an agreement. The UK’s position anticipates a trade agreement being in place by March 2019. Few, if any, believe this to be a possibility.

Knowing that the EU is unlikely to budge from its mandate, “…the UK needs to prepare ahead of its exit from the EU for all possible outcomes of the negotiations…”

Just in case proposals that the government knows will be rejected do not quite convince those who matter that the UK is flexible and open, as distinct from the EU, the white paper indulges in a flurry of provocative digs at the EU’s economic failures:

“Our approach to trade will align with our Industrial Strategy. That will be key to delivering an innovative, competitive and growing UK economy that benefits individuals and communities and makes sure the value of trade is more widely shared.”

In conclusion we can see that neither the EU nor the UK is “negotiating in good faith”. Expecting failure, both are playing political games, with their eyes on the reaction to the expected breakdown in the negotiations. This is of no value to the UK, to the remaining member states, to businesses and – least of all – to ordinary citizens. It offers an example of why politicians are held in such low esteem.