A collection of four short, independent pieces on various topics.

A European Union was (and is) a good principle, taken up by people with bad ideas, inherited by others with priest-like faith and self-interest. The EU jihadis intend us harm in retaliation for our apostasy. This demonstrates a deep lack of confidence in their project; if they truly believed in its future they would see our leaving as sufficiently self-harming not to need extra punishment. However, because they know the Project is fragile they need to magnify the harm so others won’t dare to follow our path. Neglect would be forgivable if ungenerous.

The good principle is that countries should cooperate for mutual benefit rather than fight each other for advantage. The bad ideas include that countries should not compete (which stifles innovation and beneficial advance) and to avoid populism by evading popular choice. The high priests are the officials who owe their good living to the temple of Brussels.

The positions of both sides in the Brexit negotiations can give comfort to no one. Bad outcomes for all can reasonably be expected. However, no one seems to be attending to the compelling case that staying in a failing EU would deliver a worse outcome still.

If there is no deal and tariff barriers are erected by both sides then exporters can circumvent them by moving some manufacturing to the relevant market, which means increased capital investment in the target market.

Since EU countries export more goods to the UK than the other way round there could be an initial surplus of capital to offset the trade damage, which might give us time to establish other trade deals. Frankly, post-Brexit economics are pretty hard to predict.

Any EU tariffs on Britain have to be the same level as on other countries. So the EU’s ability to make life tough for the UK would mean sabotaging its trade with everyone else in the world. Even if Britain were a small trading partner for the EU, the EU would be shooting itself in the foot with the rest of the world.

We note that some companies, both large and small, are anticipating an unhelpful conclusion by ‘re-shoring’ their supply chains. For example, motor manufacturers are seeking – and finding – local UK suppliers to replace current suppliers based in the rest of the EU. That works both ways of course, and companies in the 27 will also find more local suppliers so as to reduce their dependence on the UK. This is not the way free trade is supposed to work but businesses have to look to the future and take appropriate steps to secure it.

The EU started as a free trade area, now it’s threatening to end free trade with Britain to discourage others from leaving. This is not in the interests of its own citizens, only of Brussels’ bullies. Why does their survival override everything else?

Professor Alan Sked, emeritus professor from the London School of Economics, said “To have a deal with Canada, they had to get round one and a half thousand tariffs. …If they want to have a free deal with us, there are no tariffs. We’re in the EU, there’s nothing to worry about, there are no tariffs and it can be done very simply. The trouble is that the EU is putting on conditions which seem to be rather bizarre.”

Almost all commentary on Brexit, notably side-swipes by fervent Remainers in unrelated contexts, mark the risks that the UK takes as it moves towards its exit from the EU.

Our blog approaches Brexit from the opposite direction; from consideration of the risks for the UK (and other countries) posed by the EU.

Central among the characteristics of the EU that raise risks for its members, and indeed for non-members, are:

Risk is double-edged: we look at Brexit and see future risks, but enthusiasts look at the EU and see only present security or ‘certainty’ and assume that the present represents the future.

During the Great Potato Famine (c.1840) many Irish citizens emigrated while the British Empire didn’t do enough to help. 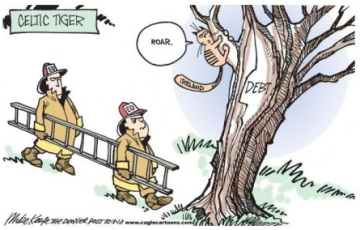 Under the benign protection of the EU Ireland has suffered yet another mass economic emigration, this time not of unskilled farmworkers and labourers – the “navvies” or navigators who built England’s canals, or the poor in the 1950s who couldn’t rent houses in London (“No Blacks or Irish”) – but young, educated workers who have sought better prospects elsewhere.

Ireland used to benefit from EU membership by receiving considerable subsidies. It became known as the Celtic Tiger as it leapt from rural backwardness to a position where average incomes (for those with jobs) is now above Britain’s.

In an interview with Irish network RTE, Phillipe Legrain, a senior adviser to the European Commission’s former president Barroso, accused the Commission and the Frankfurt-based European Central Bank (ECB) of having sided with France and Germany in insisting that Irish taxpayers were left solely responsible for the €64 billion debt burden held by its banks.

“Irish ministers should have said that it was unjust and unbearable for Irish taxpayers to bear in full the debts of Irish banks … which were largely owed to foreign banks who should logically have taken losses on their bad loans,” said Legrain, opining that the ECB “would have blinked” because “depriving Ireland of the euro would have been seen as an abuse of power … and could have caused the euro to have unravelled.”

Ireland saw its budget deficit rocket to 35 percent of GDP in autumn 2010. As market confidence evaporated, Ireland was forced to accept a three-year €67.5 billion bailout programme. This meant taxpayers repaying the losses incurred by those supposed to earn interest on capital to compensate for their risk.

Similarly when Greece’s debts became unbearable in 2010 they should have been written down, with the French, German and other banks that had recklessly lent to the Greek government taking losses.

Eurozone governments instead compounded the problem by lending their taxpayers’ money to Greece to bail out those banks, not the Greek people. The bad lending of private banks thus became obligations between governments, and ordinary citizens in the countries exposed were shafted via the EU. To try to recover their loans, eurozone policymakers imposed brutal austerity, causing a longer and deeper slump than that which Germany suffered in the 1930s.

Blackmailed by the threat of being forced out of the euro, local taxpayers in Ireland, Portugal and Spain were bullied into paying for foreign banks’ mistakes.

The bill for bailing out the foreign creditors that financed Ireland’s bust banks is €64bn, or €14,000 for every person there.