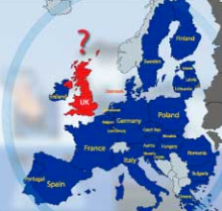 Theresa May repeatedly guarantees that we’re leaving the Customs Union (CU) and Jeremy Corbyn concurs. That was also the promise in both parties’ 2017 election manifestos and so is a commitment made by 80% of MPs now in the House of Commons, if not necessarily their true wish.

The apparent position now is that under the Conservatives we will stay in the CU until the Irish border issues can be resolved, which could mean indefinitely, or perhaps until everyone is so fed up we decide it’s not worth leaving the EU after all (which is the true wish of many MPs). If Labour were able to win power in the meantime its government would aim to stay in ‘a’ customs union, obviously not ‘the’ Customs Union because Labour was clear about leaving that.

We thought it might be helpful to review the meaning of this and other trading terms frequently used in the Brexit debate.

Customs unions usually apply where a small country is closely bound to a much larger neighbour, like Vatican City and Italy for example. They save an awful lot of bother for tiny administrations but they do pass a lot of sovereignty to the larger partner – that hardly matters when the goods and services are overwhelmingly produced by the bigger boy. The EU’s Customs Union is unique amongst all major trading partnerships because the others are ruled by Free Trade Agreements instead. Both reduce or eliminate tariffs on a range of goods and services but FTAs rely on ‘mutual recognition’ of standards and regulations rather than imposing identical ones.

Tariffs are not the major block to trade however, after all they only average around 4% and are often outmatched by currency movements. For example sterling’s devaluation after the Brexit vote saw a surge in UK manufacturing as it became more competitive and then fell back when the pound recovered. Non-tariff barriers are a bigger problem and therefore a key element of any Free Trade deal is ‘mutual recognition‘ of standards and regulations.

Remaining in the CU, or in any similar version, raises two big problems for the UK. First, any FTA it tries to arrange with other countries would require identical tariffs to the CU’s or the differences would have to be collected from the trader or repaid to it – a ‘Customs Partnership‘ in Theresa May’s term. This is extremely onerous and likely to put off any proposed partner from agreeing a deal. Also, goods entering the UK from outside the CU might end up anywhere within it so would need to be tracked and taxed appropriately.

The second big issue concerns ‘rules of origin‘ which relates to standards and is an even bigger problem than tax adjustment.

The EU Customs Union addresses the tariff hurdle by abolishing tariffs within and setting common tariffs against ‘third country‘ imports, frequently highly protective of EU producers. This does no favours for consumers of course but is a gift to those already ensconced, the established players with their special interests. It encourages internal trade and discourages world trade, it is anti-competitive in the wider context as we illustrated in our post The Future is Oranges. The Common Market (an early version of the EU) saw big increases in internal trade and helped stimulate growth for its original six nations (along with the post-war recovery, helped by the Marshall Plan). This is what captured Britain’s interest – too late, the rise was over almost as soon as we joined!

Over the last 20 years, since the Single Market and CU were established, the UK’s trade deficit with the EU has ballooned by more than 90%. That’s because the arrangements are incredibly lopsided, they don’t include many of the things we’re good at (our ‘competitive advantage‘ in economists’ terminology). After all our trade surpluses with, for example, Japan and the USA, have increased significantly in that time (not with China but that is common to others).

An FTA raises the question of what happens to goods that enter one country from a ‘third country‘ that isn’t part of the FTA but then passes on to another that is. In this case the agreed tariffs (or none) would not apply but that requires ‘rules of origin‘ and customs administration to check these rules. The rules will also define what should happen if a product is made locally but includes components from third countries, typically by defining the proportion of local content.

Staying in the (or even ‘a’) CU but not the EU would mean that any FTA the EU might make with, say, China or the USA would apply asymmetrically to the UK. Whatever privileged access these countries gained for their products, once inside the CU borders they would be free to go anywhere within it. But the UK would not have agreed an FTA with those countries so it will not share the privileges granted to EU members. This is the position Turkey finds itself in. The UK would have to try to agree identical FTAs so as not to be disadvantaged – hardly an independent trade policy. 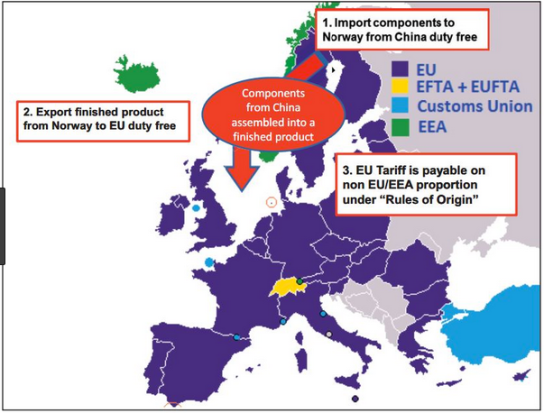 You could call the CU an anti-FTA in that it discourages free trade with those outside its walls; it stimulates internal trade at the expense of world trade and so ultimately damages overall growth. We can at least see the correlation in practice.

Just about every country in Europe has a free trade agreement with the EU so it would be perverse to exclude the UK. Perhaps we should negotiate an agreement for the excluded, ourselves and Belarus.