Jean-Claude Juncker gave his last SOTEU presentation as President of the European Commission to the European Parliament on September 12, his third since the UK Referendum. We commented on the previous two [1], [2] and now add the third. This post is the first of a three-part review of his speech.

The text of his speech can be downloaded from here:

We take into account that this is a political speech, made by a politician-turned-bureaucrat, to other politicians, with a view to be read and interpreted by journalists. There is plenty for us to get our teeth into and here we chew on selected morsels, without swallowing them.

In this post we consider three characteristics of the EU: it’s central ambition (what we call elsewhere the ideology underpinning the project); the determined efforts of its leading figures to dissemble and lie to hide this central ambition; and the deep conviction that permeates everything it does that the peoples of Europe and their elected governments are of no account. These three themes are evident throughout the President’s speech and clearly reflect the continuing progress of the EU project itself.

“We will keep working to render this imperfect Union that little bit more perfect with each passing day.”

“Such is history: parliaments and Commissions come and go, Europe is here to stay. But for Europe to become what it must, there are several lessons to be learnt.”

Of course a “little bit more perfect” means a little bit more Union (aka ‘unification’). As usual he chooses to conflate the EU with Europe; perhaps he has said it so often that he’s convinced himself that the two are identical.

What jobs has the EU created since 2000 (apart from those for the boys)? Real jobs are created at the national level; he doesn’t think we need (or deserve?) an explanation of how the EU contributed. His contempt for his citizens’ intelligence is evident throughout his speech. We note his disdain for his citizens, which is widespread in the EU and in its founding ideology. But well done EU for creating those jobs, we look forward to learning how you think it’s done.

Unity (bolding is in the original, the italics are ours)

“United, as a Union, Europe is a force to be reckoned with.” (More on ‘force’ below.)

“A strong and united Europe is what allows its Member States to reach for the stars.”

“So let us show the European Union a bit more respect. Let us stop dragging its name through the mud and start defending our communal way of life more.”

Who does he think is defiling the name? Of course people criticise and he may answer them but this is more like paranoia than politics. Does he mean something by “our communal way of life”? If so, what? Perhaps there could be such a thing if only we would unite and stop all our grumbling. Then we would have a communal way of obeying his government, silently and fitting to our station.

“By the elections, we must show that Europe can overcome differences between North and South, East and West, left and right.”

‘Over to you, to overcome your differences – it’s all your fault.’

“This is why I am today calling on all to work closely together over the next months, so that we can jointly deliver on what we have promised – before the European Parliament elections.”

We note the implied threat; his audience will be up for re-election so they had better get down to it, delivering on ‘our’ promises. He is clearly frustrated by his impotence to solve very obvious problems but these are not due to his limitations obviously.

“We need more solidarity not for solidarity’s sake but for the sake of efficiency.”

How would we, or anyone, measure efficiency as delivered by these institutions? What would it mean? He may mean don’t waste your time by arguing with our decisions, just bow to our great wisdom then go forth and implement them. (Otherwise you’re diverting us from making lots more decisions on your behalf.)

He isn’t doing much work for trade agreements by fretting about unity rather more than preserving trade with the EU’s largest export market. What work is he proposing towards stabilising the euro that doesn’t imply binding the weakest so they can’t struggle to their feet – the stability of the grave?

“The Commission will resist all attacks on the rule of law. We continue to be very concerned by the developments in some of our Member States. Article 7 must be applied whenever the rule of law is threatened.”

We guess that he’s pointing, discretely, at Poland and Hungary. Surely he isn’t hinting at Germany and France, who only follow the rule of law when it suits them.

“I want us to do more to bring together the East and West of Europe. It is time we put an end to the sorry spectacle of a divided Europe. Our continent and those who brought an end to the Cold War deserve better.”

We assume he doesn’t mean “together” geographically, but what could he mean? (Apart from unification – see below.) And how did the Cold War get in there? Does he think that the EU ended that? Perhaps he means that we’ve all been rescued from an overbearing power; so now be grateful and behave as we tell you. Isn’t all this fluff tiresome?

“But above all, I would like us to reject unhealthy nationalism and embrace enlightened patriotism. We should never forget that the patriotism of the 21st Century is two-fold: both European and national, with one not excluding the other.”

Wishful thinking on a continental scale. By “unhealthy nationalism” we may assume that he means ‘populism’ or reprobate governments that disagree with him. But which? Or both? Or something else? And by “enlightened patriotism” he presumably means the ‘European’ (strictly the EU) sort. But we all love the EU, don’t we? Actually no, we don’t, which is why he is grumbling. And we are writing.

Why does he not question his need to continue repeating his calls for unity? Well, he does question it and the answer is immediately available – to him: the nations and their nationalist leaders refuse to cooperate. It’s all their fault, the lack of unity needs no further explanation and therefore no further thought. This absence of critical reflection will be a main cause of the EU’s breakdown when it happens.

“A Europe that works for peace, trade agreements and stable currency relations….”

“This is why – despite great resistance at the time – I reignited the idea of a Europe of Defence as early as 2014. And this is why I will continue to work day and night over the next months to see the European Defence Fund and Permanent Structured Cooperation in Defence become fully operational.”

“Allow me to clarify one important point: we will not militarise the European Union. What we want is to become more autonomous and live up to our global responsibilities.”

“If we want to – without militarising the European Union – to increase defence spending by a factor of 20, we will need to decide quickly.” 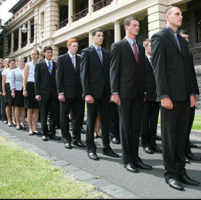 He wants the EU to have a defence force but not to be militarised. One way to dissolve the apparent contradiction is to understand that a defence force is for internal defence, since even if it were just for show it would require that it be a military force. Internal defence – an intelligence service together with a police force, both backed up by an army in all but name – is what every empire in history has required in order to keep its disparate components ‘unified’. [3] This ‘force’ is so far missing from the EU government and leaves it more vulnerable than its leaders desire. Since there is little external threat (excepting immigration and terrorism) the EU needs to be defended by forcing us to conform, in the manner of earlier European empires.

“This is what is at stake when Europeans take to the polls in May next year. We will use the 250 days before the European elections to prove to citizens that, acting as one, this Union is capable of delivering on expectations and on what we promised to achieve at the start of this mandate.”

By ‘we’ we assume he means ‘you’, the parliamentarians he is addressing and the nations they notionally represent (actually they represent political alliances invented for Parliamentary purposes).

“Today, we are proposing a new Alliance for Sustainable Investment and Jobs between Europe and Africa. This Alliance – as we envision it – would help create up to 10 million jobs in Africa in the next 5 years alone.”

He appears to believe this stuff; of course he doesn’t explain what an alliance would do to help. He is planning to create jobs in Africa without having shown how his crew have created any (useful) jobs in Europe.

“…the Commission will present initiatives to strengthen the international role of the euro. The euro must become the face and the instrument of a new, more sovereign Europe. For this, we must first put our own house in order by strengthening our Economic and Monetary Union, as we have already started to do. Without this, we will lack the means to strengthen the international of role of the euro. We must complete our Economic and Monetary Union to make Europe and the euro stronger.”

Key phrases here: “must become”, “more sovereign”, “strengthening our Economic and Monetary Union”. But the true agenda is in the final sentence; completing EMU will make the euro stronger, and the euro is the glue that will (or should) hold the whole edifice together. Except that it can’t and won’t, which he cannot see. [4] Wouldn’t it be great if the UK remained and joined the euro-party (as we would have to if we left and re-joined, by law); then the power of the world’s largest financial market would strengthen the euro so that the world would be even more vulnerable to its design weakness and brilliant management. [5]