“If you’d like to push me and speculate on what might happen in a no-deal scenario in Ireland, I think it’s pretty obvious – you will have a hard border.” said Margaritis Schinas, chief spokesman of the European Commission on 23 January.

If there is no deal, “We will have to find an operational way of carrying out checks and controls without putting back in place a border. We would be obliged to carry out controls on goods arriving in the Republic of Ireland. My team have worked hard to study how controls can be made paperless or decentralised, which will be useful in all circumstances.”, said Michel Barnier, lead Brexit negotiator for the EU.

So the EU, as so often, is playing games. Schinas’s speculation is as obvious as he says. Barnier is attempting to manoeuvre the UK into accepting to be permanently tied into a customs union, with all the disadvantages to the independence of the UK that such a future implies; ‘sign up to our deal’, he seems to be saying, ‘and there will not be a need for a border’.

“We are ready to be more ambitious if the British decide to shift their red lines, for example by remaining in a customs union, or participating in the single market. I believe there is a readiness in London for that.” Barnier again, from the same speech in Brussels. But they are not going to allow an exit from the backstop: “The question of limiting the backstop in time has already been discussed twice by European leaders”, Barnier said. “This is the only possible option because an insurance is of no use if it is time limited.” The withdrawal as it stands (actually has fallen) is “the only possible option” for Britain. 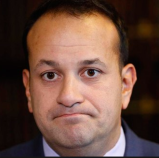 Leo Varadkar, the Irish Taoiseach (Prime Minister) is, as is his wont, playing along with the EU side: “Regardless of Brexit, the British government will always have responsibilities as co-guarantor of the Good Friday Agreement to ensure that, even in a no deal, there will not be a return to a border.” Yes, the British government has promised that there will be no hard border, but “always” is a word used by politicians when they know it isn’t true. For example, the government that made the promise will not always be in power (indeed, possibly not for much longer) and no government will consider itself committed to promises made by a predecessor. And, as leader, he has to say what he wants people to believe will be the case. And to maintain the pressure on present and future UK governments.

He said that the Irish government would have “a real dilemma” if the UK leaves without a deal: “We would have to negotiate an agreement on customs and regulations that meant full alignment so there would be no hard border….We already have that agreement, and that is the backstop“. While the UK dithers the EU remains relentless.

Schinas again, “So I will not now speculate on this plan B [no deal] because…we are for plan A, which is set by the withdrawal agreement and the political declaration as a package.”

We can understand this relentless pressure – and the rigid red line of the withdrawal agreement – as providing support for Mrs May’s deal (as they want us to see it, but see The Withdrawal Agreement, a Fatal Flaw). And she will need all the support she can get to drive enough MPs to vote for anything resembling the WA. If that can be achieved (and we are firmly opposed) then both the EU and Remainers will get what they want – Britain remaining indefinitely in the customs union and single market. So far Remainers don’t like the WA because it is clear, even to them, that Britain’s status in such a deal would be a second-class, semi-member of a project over which we have no say and which will be able to use the European Court of Justice to overrule any initiative that the EU dislikes.

Despite Junker and both UK and Ireland governments committing to no hard border, the EU Commission spokesman is threatening one – so much for the Commission’s commitment to peace in Ireland. The Irish border has never been secure, even with the hardest of borders manned by the British Army. Trusted traders and other technological solutions would deal with most things but the people of the borders have always smuggled and still do, because taxes differ between the two states. Initially things needn’t change because tariffs and regulations will be identical, as things diverge the consequences can be examined but there will always be leaks.

The recent bomb in Belfast was suspiciously convenient for those that want to ‘weaponise’ the border. Is it right that the threat of terrorists should derail what people voted for? Isn’t the EU provoking war in Ireland rather than peace?

Here are some of our previous posts in which we discuss the Irish border issue: