The Opposition, the Liberal Democrats, SNP and the Green MP, with the help of a few Conservative rebels, defeated the Government last week by demanding a meaningful vote on whatever ‘Deal’ it strikes with the EU on withdrawal. We can argue about how meaningful such a vote can be if the choices are to accept the deal, demand that it be renegotiated, or exit with no deal, but the winners were intent either on opposing the Government or frustrating a meaningful exit. The Tory rebels in particular have portrayed it as a matter of principle that Parliament must not be bypassed by the Executive. If they are sincere then they are blinded by their faith to several anomalies. 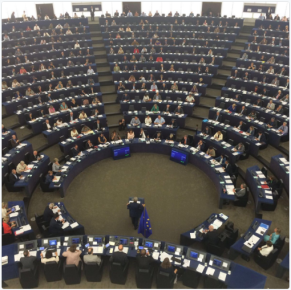 If Parliament is to be the ultimate authority then why have so many of its powers been surrendered to Brussels? The EU of course has its own parliament so this might be seen as passing authority to a higher elected and representative legislature, if you believe in a European state. Again we can argue about the democratic credentials of the EU Parliament (we did in these, among other posts, Democracy, Ever Closer Union, Why Not Reform the EU?, Remainers Moaning, There’s None So Blind, To Veto or not to Veto?, Discontented Democrats, Democratic Deficit, Pontificating Professors, The Rome Declaration, For Richer or Poorer?, Democracy or Institutional Strengthening?) but it is interesting to note that its powers are restricted by its own executive regarding changes to EU law. “If a legal add-on is proposed as a delegated act, the parliament has a chance to veto it. If it is an implementing act, MEPs are powerless to intervene.” It seems that the European Parliament is excluded from voting on legislative details by the Lisbon Treaty in much the same way as Henry VIII excluded the English Parliament. So why weren’t the MPs making a fuss about that too?

Although many MPs would rather EU membership had not been put to a direct vote of the people they agreed to do it and promised to abide by the decision. They didn’t expect the choice that resulted but voted overwhelming to abide by it.

It’s interesting that the next elections for the EU Parliament are due to be held in the period May – June 2019, just after the UK leaves the EU, or at least its institutions (we’ll be stuck in limbo for a year or two). There will therefore be no British MEPs and hence no UKIP or Eurosceptic Tories to hold it back from approving whatever the Council or Commission wants. But wait, the EU is at odds with the Polish Government over a change to the way it appoints judges; the Law and Justice Party is very popular with voters there so what nuisances will the new Polish MEPs be making of themselves? Austria now has an anti-immigration government so its MEPs could frustrate EU policy in some areas. Then Catalonian MEPs may feel rebellious on occasion.

In place of Nigel Farage there is the prospect of supporters of Marine Le Pen, Beppe Grillo and Geert Wilders inserting some equally annoying characters to the chambers in Brussels and Strasbourg. This fairly useless body could become even more dysfunctional.