Are the EU’s ‘values’ merely aspirations? And are there hidden values it doesn’t admit to? Some other views. Do we love or hate EU?

Article 2 of the EU treaties states:

“The Union is founded on the values of respect for human dignity, freedom, democracy, equality, the rule of law and respect for human rights, including the rights of persons belonging to minorities. These values are common to the Member States in a society in which pluralism, non-discrimination, tolerance, justice, solidarity and equality between women and men prevail.”

This is so manifestly absurd that it is hard to stay polite. First, at the EU level democracy is denied, by design not by accident. Second, the values the EU espouses are, by its own reckoning, not “common to the Member States”, since it is itself challenging the debasement of these very values in some of its member states, notably Hungary and Poland. Most of our posts point up one or more discrepancies between EU reality and its PR guff, which too many believe without checking. [1]

Friends of Europe is an entirely independent and neutral think tank which welcomes participation from all sides, provided only that they adhere to these values. They have conducted a survey, which comes to the conclusion that, “without change and reform, the EU will remain irrelevant to a majority of its citizens”:     https://www.friendsofeurope.org/publication/europematters-message-citizens

The very least the EU could do would be to try to work up towards keeping these promises, to which each Member State has signed up, even if cynically in some cases. We think that many Remainers want to believe in an EU that adheres to Article 2; they want so much to believe this that they are willing to ignore the true founding principle of the EU (a united states of Europe) and the practices that so clearly contradict the declared values.

The EU’s only major success is convincing lots of people that it has been a success. Its moderate successes could all have been achieved by existing institutions, particularly the Council of Europe, a more promising body that has been completely overshadowed by the glamorous (and expensive) Union. It’s achievements did not need a government, parliament and huge civil service. 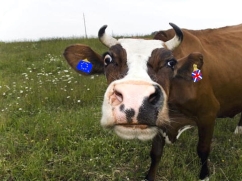 Well-meaning liberals should not assume that the EU shares their values. It is not a benevolent union but one designed for self-interested groups, foremost among them being German manufacturers and French farmers, in accordance with the aims of its principal designers. It is imperialistic in its approach to less-developed nations despite distributing aid (much of it currently funded by Britain). We have explained previously [2] how its Customs Union protects EU businesses against competition, beyond the hopes President Trump may have for his America First trade wars. It favours imports of raw materials, from Africa for example, and discriminates heavily against their value-added ones. Germany, for example, is the largest exporter of coffee by value, after Brazil. Why shouldn’t Kenya roast its own beans before selling them to Europe? Why does aid not assist them to develop their economies rather than spend it on projects (often corrupt ones) that have limited long-term benefit to them?

The EU does proclaim values that all good liberals support (see above). As usual this is just a shop display but inside it is mysterious and dark, full of rotting things wrapped in brightly-coloured packages.

Contrasting not so much with each other but with the anti-competitive, federal reality of the EU.

“The competitive struggle (among the European nation states) created the largest opportunities for modern western capitalism. The separate states had to compete for mobile capital, which dictated to them the conditions under which it would assist them to power.” (Max Weber)

The EU is determined to eradicate internal competition, through unification and harmonisation, and thus will eliminate the main incentive to progress. Of course, they aren’t succeeding, and won’t, much to their annoyance. [ref SOTEU 2018]

“…peace is created and guaranteed by an equilibrium of forces and a most vigorous rivalry. Thus, nature wisely separates the nations.” (Kant)

The EU claims that it keeps the equilibrium itself but cannot provide any evidence to support this claim; indeed they are striving to eliminate any signs of vigorous rivalry.

“It is strange how pundits who claim to want greater competition in the domestic economy – for example, in banking – are so afraid of competition for people between states, decrying it as a race to the bottom. Yet monopolies are always bad, in every sphere of human endeavour, breeding complacency, curtailing innovation and throttling progress. …Globalisation is not just about buying cheap Chinese goods: it also limits the state’s powers to over-tax or over-control its citizens.” (Allister Heath, Daily Telegraph)

The EU is not accountable, even to its citizens, therefore there is nothing to limit the super-state’s powers.

“…competition among nations tends to produce a race to the top rather than to the bottom by limiting the ability of powerful and voracious groups and politicians in each nation to impose their will at the expense of the interests of the vast majority of their populations.” (Prof Gary Becker, Nobel prize winner for economics)

When all competition between member states has been eliminated (if you believe that could ever happen, other than in theory) then the only control over “voracious groups and politicians” will be the massive imposition of laws and regulations, which even the EU disrespects when it suits.

“With apologies to Adam Smith, it’s fair to say that politicians of like mind seldom meet together, even for merriment and diversion, but the conversation ends in a conspiracy against the public, or in some contrivance to raise taxes. This is why international bureaucracies should not be allowed to create tax cartels, which benefit governments at the expense of the people.” (Edward Prescott)

It’s also fair to say that politicians in the European Parliament (EP) are seldom of like mind, though they often meet together, in Brussels and Strasbourg. But they are largely irrelevant anyway; the politicians that matter – and that conspire against the public – are in the EU institutions.

Ode to the EU

“How do I love thee? Let me count the ways.” Elizabeth Barrett Browning.

I love that you want us all to be more prosperous.

I hate that your ideas are counter-productive, so we aren’t. [3]

I love that you care about poor Africans (and others) and send them aid.

I hate that you won’t help them develop their own strengths; that looks like imperialism. [4]

I love that all the member countries vow to stand up for each other.

I hate that you drive the weak ones into poverty and unemployment to preserve your failing plans. [5]

I love that you are the largest union of democratic nations in the world.

I hate that you are purposely non-democratic, in case voters choose populist-nationalist leaders who resist ever closer union because (you say) that stops us fighting each other all over again. [6]

I love you because you make so many good promises.

I hate you because you fail to keep them. [7]