Conservative MPs and Cabinet are considering May’s Deal, No Deal, a Mitigated No-Deal, a Managed No-Deal, a Norway-Plus Deal, a Canada-Plus deal or no Brexit at all. Meanwhile plans are finally being published in case the default happens, leaving with no agreement on WTO terms.

The EU has published its own plans for a no-deal Brexit (http://europa.eu/rapid/press-release_IP-18-6851_en.htm). We don’t need to panic any longer because we’ll be permitted to fly our medicines from the Continent and take our holidays by the sunny Mediterranean Sea. Safety permits will be granted for direct flights but not for internal ones between EU27 destinations. Trucks can travel, both ways, otherwise the Irish would be stuffed. UK financial houses will be granted ‘Equivalence’ to allow them to continue insuring and facilitating trade within the EU. These arrangements will all be temporary, varying from 9 months to 2 years. Although this leaves things hanging it is a very considerable softening by the EU Commission, postponing the “cliff edge” so that both sides get time to make adjustments – presumably that includes car makers with their just-in-time assembly lines.

Michel Barnier: “There will be no mini no-deal deals.” 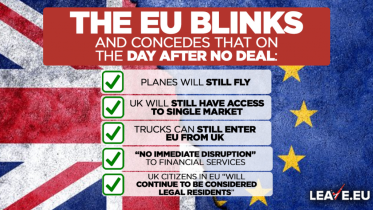 The Irish Government too has published some thoughts in its guidance to businesses, though it doesn’t seem to have thought very deeply (https://www.bbc.co.uk/news/world-europe-46630779). The document warns that Ireland’s economy is likely to be the “most adversely affected” of all EU member states and avoiding a return to a hard border “remains of the highest priority”. But the Commission still insists that without an agreement “all relevant EU legislation on imported goods and exported goods will apply as of the withdrawal date” and in particular “every consignment” of live animals and animal products would need to be checked at “Union border inspection posts (BIPs)” and that the new posts should be proposed by 15 February 2019. Both the Irish and British governments say they won’t do it, yet Junker assured the Dáil that the EU wouldn’t either (https://youtu.be/G6ljJhZZo5s). The EU says it will guarantee that its ‘peace programme’ promoting reconciliation in Ireland and Northern Ireland would continue. The strategy stresses that the EU’s customs rules would apply across the bloc, making a hard border seemingly inevitable, but there are no published no-deal plans for the Irish border.

If the UK “crashes out” (with a softened landing it now appears) there will be no formal transition so a big hole of up to 12 billion euros a year will occur in the EU’s budget – its plan doesn’t mention this perhaps because it would display a weakness in its position and frighten the horses, or rather the so-far compliant national governments. There is also the question of the £39 billion ‘divorce bill’ which the House of Lords says we wouldn’t be obliged to pay and which Dominic Raab says we should spend to help UK businesses harmed by Brexit. Not all lawyers agree with their Lordships but who would try the case and how long would it take? Michael Waibel thinks the ECJ would have the right to rule on many aspects (https://www.ejiltalk.org/the-brexit-bill-and-the-law-of-treaties/) but surely it could be shown that it is not a disinterested body since it has a clear mission to forward the EU’s interests. 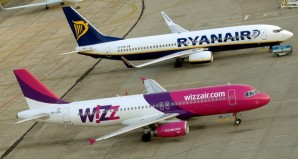 So the Irish will have time to complete their land purchases at Dublin and Rosslare ports to deal with congestion caused by new custom checks, the French can do the same at Calais and the British can convert some of the M20 into a lorry park. But will the affected (afflicted?) businesses across Europe then allow the Commission to damage them or will they make their governments push back? The Irish won’t be pleased about the introduction of road haulage licences and the Hungarians won’t be happy about the flight restrictions. Ryan Air and Wizz Air account for about 50% of the Hungarian market, including internal EU flights: Ryan Air now has a Hungarian subsidiary so that it can keep all its routes; Wizz Air is a Hungarian company listed on the UK stock exchange, with its holding company based in Jersey plus a UK subsidiary to protect its UK business (it works both ways). Ireland has 13,000 hauliers but would receive only 1,000 licences under the EU’s intended scheme, Ireland objected violently and the Commission backed off. The plan now includes a temporary exemption to allow “basic connectivity” – there is flexibility when the EU needs it.

The Poles are concerned about movement restrictions on their citizens but otherwise have said they want to maintain close links to the UK. German manufacturers have publicly obeyed their government’s wish to stand tough but their industries are already suffering due to world trading conditions and their economy is on the verge of recession – will they happily abandon their biggest market in the face of this? Are the Italians intrinsically hostile to the UK and in love with the EU’s demands? The “mini no-deal deals“ do not apply to Gibraltar. So far Spain has capitulated when pressed by the rest of the EU to let go of this lever.

The EU (and Remainers here) have often pointed out that EU exports to the UK are a far lower proportion of its total exports than is the case in the opposite direction, however it is not simply aggregates that matter. Individuals, businesses and national economies will suffer if trade is unnecessarily restricted, especially at this time when trading conditions are tough and the eurozone faces its own cliff edge, perhaps even oblivion. Is reality dawning?

The EU Commission wishes everyone peace, goodwill, prosperity and a happy New Year, except renegades of course. (Renegade – “a person who deserts and betrays an organization, country, or set of principles.”)

As the New Year approaches the EU Commission has finally shown it is concerned about the effects of its hard-line negotiations on the Union’s welfare. Of course the Commission has no worries on its own behalf, the commissioners are well protected unless the Council forces it to moderate its proposals under pressure from their members own national self-interests. 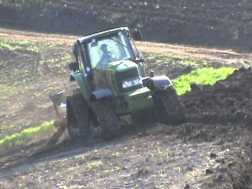 Until now the measures proposed were designed to protect the EU and if possible to damage the UK and induce its businesses to transfer to the EU. The plan was a trade war of greater intensity than anything President Trump has decreed. It was cherry-picking. It was malevolent. It ploughed up level playing fields. It proved there is no law the EU cannot overturn if it wants to.

This is still the Commission’s plan but the clever folk who have outsmarted their British counterparts at every opportunity may have outsmarted even themselves. The ‘temporary’ measures now proposed for a No-Deal outcome may be prolonged indefinitely until they are superseded by a genuine treaty.

If the EU intended to foster peace between nations and promote economic well-being how have its current actions lead to this goal? The EU and the UK will in any case remain neighbours and trading partners – and it would be unwise to handle Brexit in a way that leaves the UK in the role of a disgruntled and hostile ex-member. Britain has the capacity to prove there is a better path.

Does the EU intend to show the world that it is a union to which member nations remain not because they find membership beneficial but for fear of being punished? Will the countries stay in line when their national interests are affected?