The EU and its negotiating team have consistently bullied the UK over its decision to leave. We wonder why they choose this tactic rather than trying to persuade us, and others, what a lovely project they run. We gave some examples of their bullying tactics in these linked posts.

Of course the bullying and threats started, as they had to, before the Referendum. The effort was led by Jean-Claude Juncker, then and for a while longer the President of the European Commission. In this short post we give some examples, quoted widely in the press, of what was on his mind and in his mouth: “I’m sure the deserters will not be welcomed with open arms“. “If the British should say No … then life in the EU will not go on as before“. “The United Kingdom will have to accept being regarded as a third country, which won’t be handled with kid gloves. ” “If the British leave Europe, people will have to face the consequences“.

Note “deserters” and “Europe”, which signal his attitude and the EU’s ambition.

In the first item we explored some of the reasons why bullying is the preferred tactic. We concluded that when it suits the EU they will compromise but if they see an opportunity to screw us they will. They aren’t friends, they’re nasty adversaries as Remainers should have noticed.

There’s more in the final item in this post, sub-titled Negotiating with a Big Stick. We have seen plenty of evidence that Mrs May sees the UK as lightweight and no match for the bully next door.

The next post was a more general critique of the hegemony that the EU is seeking in Europe. This aim underpins the approach that the EU has taken to Britain as we try to extract our country from its clutches. Aggression is the preferred mode of action of those whose aim is to dominate.

The EU wants the UK to fail when it leaves and is keen to help us along with that, while some in the UK seem to want to help them to see us fail. This is because we might demonstrate a better way that others could follow and because the EU masters don’t like competition.

Theresa May was savaged at a meeting of the European Council. The Council President, Donal Tusk, then pretended that it was not a savaging but an expression of his admiration for her.

Remainers often cite claims by the EU of the damage that the UK will experience as a result of our foolish decision to leave the Union. Mostly such claims are a vicious negotiating tactic and its sad to see EU enthusiasts using them to beat us up. While we, as Leavers, accept that there will be disruption to Britain’s economy as we leave, we recognise that much of what we are told to expect are no more than threats and the outcomes are in the hands of the EU, not God. If they choose to implement their threats then they will inflict damage on the EU too, but threats are a standard weapon in the bully’s kit-bag.

We should not expect the bullies to offer any agreeable reason for us to change our minds and advocate that Britain should stay in the Union. We concluded that the Union must be maintained through fear because it’s hard to love. Heaven forbid that countries should choose what they think is best for them.

M. Barnier continued to threaten the UK. This time he told journalists that Britain could have a future relationship with the EU similar to the one recently concluded with Canada, but without any special advantages. We are after all going to be a ‘third country’ and so cannot expect to be treated well when (if?) the divorce goes through.

Implicit in the threat is that the EU will do whatever it can to encourage financial service firms to move to Union territory. This is an attempt to counter a specific competitive advantage that Britain has and that the EU fears. 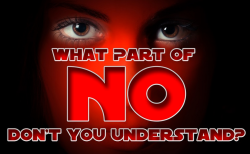 A favourite bullying tactic for the EU is to claim that any relaxation of their withdrawal terms, notably the Irish backstop which would keep the UK tied closely to their Customs Union and thereby to their regulatory framework, would threaten the Good Friday Agreement and so bring back the violence that this Agreement put an end to.

We compared this tactic, and the grovelling appeasement that has been the UK Government’s response so far, to the response of Neville Chamberlain to Nazi bullying, which encouraged Hitler to continue his pursuit of European domination.

What so often makes bullying effective is the failure of the victim to stand up to it. What defeats bullies is resistance, and resistance is what the UK Government is failing to offer in response to the EU’s tactics, which is the main reason they continue their bullying. What is less clear is why they, and their Remain supporters, don’t want to offer any positive reasons for Britain to stay in the Union. Most likely that is because there are no good reasons.

Sometimes Remainers join the fun and contribute their own form of substance-free bullying, thereby illustrating the fragility of the case to remain (we’re still waiting to hear or read a positive argument from Remainers).

The Economist newspaper is solidly and reliably in the Remain camp and our post below picks out some of the insubstantial ways in which the case to remain is made but not supported. An interesting, if unpleasant, side-light shines on the way in which bullying can be echoed and become self-inflicted; we quoted two short statements, one from Michel Barnier and its echo from Theresa May that illustrate this echo effect.

It’s not only Britain that gets bullied by the EU; we also give an example how blame for failure is often transferred to other member states, for being insufficiently convergent to EU demands and expectations. More important is the oft-repeated fiction that responsibility to get agreement on the terms of withdrawal from the EU lies with the UK.