Because of its history Germany does not want to appear to be dominating other European nations but just can’t help itself.

Following up our previous post, First Among Equals?, we now pick out some other authors who have written on the subject of Germany’s status in the EU.

Sir Paul Lever was the British ambassador to Germany during the turbulent years of 1997 to 2003. The linked website [1] provides a review of his recent book, Berlin Rules, which covers similar ground to The Economist article (see previous post) and comes to the conclusion that Germany “exercises power in Europe and provides the impetus for all of the EU’s decisions” but that it is “power without purpose.” The reviewer is critical of that last phrase, arguing that Lever ignores his own conclusion, that “Germany exercises power to protect the German economy and to enable it to play an influential role in the wider world.” That clearly is the purpose.

Today Germany is widely seen as the dominant power in Europe. Over the last couple of years, the idea that Germany is again dominating Europe has become a mainstream view. One example: German surpluses have reached a height that violates the EU’s macroeconomic imbalance rules, without provoking a negative reaction from the EU’s institutions.

Quantitative easing by the European Central Bank (ECB), as well as its low-interest approach, is the direct result of Germany’s austerity policy imposed on economically weaker nations. Its fiscal orthodoxy within the Eurozone has made fiscal policy a contributor to the crisis rather than a solution.

There is little doubt that Germany has become the most critical economic as well as political actor in the EU since the outbreak of the Eurozone crises, and yet it is misleading to propose that the country is the sole ruler of Europe (which perhaps no one does). Germany can exercise strong influence and power when these come in “European disguise.” 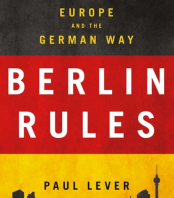 BrexitCentral has also read Sir Paul Lever’s book and offers comments on our subject on their website. [2]

“Germany’s formal position under the European treaties might be no different to other member states…but as…Sir Paul Lever mentions in his recent book, it’s Germany’s view which is sought by the Commission before it acts, and other governments make sure they know what Berlin wants before they decide on a course of action.”

“Representatives of ostensibly sovereign nations would flip their position completely if it became clear that the Germans had made their minds up on a proposal.”

This matters because, if the UK commits to a common rulebook with the EU, Germany will call the shots. It will do this under the guise of European federalism but the purpose will still be to advance its own cause.

The acquis communautaire is not a neutral body of legal text. The rules represent a mechanism which is often used to favour some member states over others. This has not been sufficiently widely acknowledged, in the UK and elsewhere. The EU is not a federation of equals; Germany has consistently been the determiner of EU policy decisions and that won’t change.

EUObserver has an interesting take on this issue [3] (our emphasis added):

It’s an important point that Germany uses the cover of the EU both to promote its own interests and to disguise this fact, given its sensitivity about its twentieth-century history.

In a longer opinion piece [4], also in EUObserver, the author, Eoin Drea, takes a different line, arguing that Germany should be supreme but is falling short. On the way to his conclusion: “to really lead and shape Europe, Berlin must realise that you can’t live in fear of the future by trying to remedy the past.”, Drea confirms much of the argument we and others make, that Germany is pre-eminent in the EU. However, he believes that this pre-eminence is more in the eyes of others and Germany should do more to exercise its position, for the benefit of the EU.

“The EU might be relieved to have cobbled together a deal [to confirm Ursula von der Leyen as Commission President] but make no mistake, Europe is increasingly rudderless. And Europe is floundering because Germany refuses to lead.”

Drea doesn’t make much of his claim that “Europe is floundering” because he wants to focus on what Germany should be doing, in his view, to rescue the Union.

“German regimes, for the last two decades, have prioritised perceived German interests to the detriment of the cohesiveness of EU policy making.”

He acknowledges that this, “of course, occurs with all member states”, confirming our view that a key weakness of the project is that national interests will take precedence over Union interests, for the reasons we outlined in our previous post [5]. (However, he would probably not agree with our conclusion that the EU project is unsound and should be unwound as soon as possible.)

In support of his (and our) case he points out that Germany, in its own interest and counter to the declared interest of the EU, continues to support the Nord Stream 2 pipeline to bring gas from Russia directly to Germany. [6]

He also claims that Germany was “seriously peeved” when the EU refused to sanction the merger of Siemens and Alsthom. “Industrial policy is another example of how German national interests are beginning to seriously erode the EU’s capacity to plan strategically.”

He then shows his own peevishness, while confirming the claim of German dominance: “Shouldn’t the creation of EU champions and a new EU industrial policy be based on an actual EU-wide debate and analysis? If not, it’s just imperial power politics with a different name.”

Drea continues his diatribe against what he sees as Germany’s refusal to take a lead, offering the euro and defence spending as examples:

“The German response to the fundamental structural weaknesses of monetary union…has been painfully slow, focused on domestic German political interests and devoid of all long-term vision.” [7]

He is really wound up about Germany’s damaging supremacy:

“In effect, the EU has become a prisoner to Germany’s combined historical psychoses.”

“The real German legacy since reunification…has been to drag Europe along into this Freudian maze. Berlin lies trapped in the death grip of a ‘Schwarze Null’ [no debt] cult and it’s the rest of the EU that’s paying the price.” There seems to be some confusion here between Germany’s obsession with not appearing to be dominant in Europe and the fact that its financial culture is clearly dominant in the EU.

“Germany must acknowledge fundamental realities such as how the Eurozone, as currently constructed, is simply unsustainable for many other member states.”

From our point of view this opinion piece is valuable, coming as it does from a keen supporter of the EU project, because the author confirms so many of our claims that the project is, in fact, unsound. But Drea’s position is different, the EU needs Germany to take the lead. We will leave him with the last word: “Germany deserves more, so does Europe.”